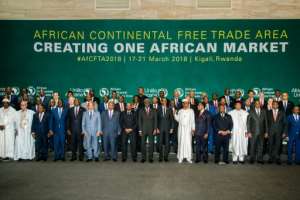 The present foreign loans are working against Africa. If we were crawling from the past four centuries with African technology, we would be better than where we are today. The point of the Acceptance Commission is transparency and the economic benefit of loans rather than personal favors to negotiators. Those that are competent and skillful in managing financial transactions must not be influenced by kickbacks but subjected to viability of projects.

Africans are honest, dedicated and modest when placed in intercontinental and Trans-African positions outside their own country. It may be hard to believe that if some of the same folks are placed in responsible positions at home, they become looters. It boils down to the fact that they realize they are being watched and would lose prestigious positions if caught with their hands in the cookie jar in a different (sometimes hostile) environment.

Indeed, those Africans that were suspected of wrongdoing and watched for any misstep came out clean after a probe. Koffi Annan as UN Secretary General and Akinwumi Adesina as the President of African Development Bank were exonerated of suspicious activities. So it is a relief that Africa has produced men and women of impeccable characters for inter-country and international offices in health, law and business. The crooks among Africans have not lived up to or been denied reputable positions outside their home countries.

One of Kwame Nkrumah's ideas was a unified African voice to reject the disadvantageous divide and unfair trade tactics of the outside world. It was Cocoa that Nkrumah tried to use in order to break price dictation by Western consumers; not only by cooperation of African countries but world cocoa producers. They capitulated and let short term pain of the Cocoa Embargo cloud their long term gain to the disappointment of Nkrumah.

Though the Cocoa Embargo failed earlier, the 1972 Arab Oil Embargo worked later and turned oil producers into rich countries on the long run; except African countries that wasted the Oil Embargo windfall profit on individual personal aggrandizement. One country actually used the oil income to buy the worst abject poverty in the world. Unified action against exploitation of resources and manpower does not mean surrender of sovereignty.

If there is anything to learn from Africa's failure to implement development, take care of their people with earned income from natural resources; it is the misuse of foreign loans. African countries so far send their skilled personnel to intercontinental and African Union. There are also international bodies that evaluate the efficacy of international loans, assistance and aids.

There is no reason we cannot have the same bodies in Africa Union, even as a transparent advisory body to expose the realities, conditions and terms of each of these loans.

There is a general fact that Africa is still hemorrhaging resources and income. The solutions for blocking most avenues of loss must come from different angles. Some of those abetting and encouraging the bleeding will present themselves as problem solvers are looking for loopholes to sabotage the system. Otherwise, these problems could have been solved years ago. If anything, Africa has been getting poorer and financial problems getting worse. Some have given up claiming crooked Africans are deft in exploring loopholes.

While it is true that some lenders forgave some debts of the poorest African countries recently, the relatively wealthy countries with attractive natural resources were left out since they have the means to pay back. Though most of them cannot demonstrate the initial projects the loans were used for. This is facetious because lenders have other interests when African countries default. See Easier To Capture With Loans Than Guns.

While Presidents have claimed they are using these loans for projects that will pay for itself expeditiously, we are aware that some Asian countries and China specifically have taken over projects in East Africa in lieu of payments like the repossession of family house or car. This is not only embarrassing, it spells the takeover of African land gradually by outside forces that will use it for their self interest.

The benefits of loans are the same for families, countries and businesses. Generally, we use loans on projects that appreciate in value to benefit us. A family uses a loan to get a car and buy a house. The car enables you to get to work and make money to feed and house the members. A country can obtain loans for infrastructure that enable citizens to be more productive generating income that can be used to pay back.

The same is true of businesses that rely on "other people's money" to generate income, expand to meet demands, employ workers and pay back. African leaders know this. Savings should be used for personal vanities not loans. African countries put their population in jeopardy when they use loans for vanities and pay inflated salaries to live like those they borrow from without comparable productivity or GDP.

The way these loans are piling up on African countries, lenders that dictate the terms of repayment will become the major players in Africa's economic future the same way they did during Slave Trade. It is not different from the ways loans are personalized for individuals. Even the loan forgiveness does not come with nothing in return.

How well are returned African loots laundered abroad utilized? We have cases of African looted funds that have been returned to home countries, only to be re-looted by those waiting to collect. Those handing back stolen funds to the Government after taking out high legal and administrative fees know that they would be re-looted.

Foreign loan has become the Trojan horse in African countries. Most of these loans are Odious Loans since the lenders and the Africans enter into negotiations in bad faith knowing full well that the debtors have no intention or means of paying back. When our African leaders are invited to European, Asian or America Regional Economic Summit; they go cap in hand begging for debt relief. Imagine the face of lenders when looters beg for relief of stolen funds!