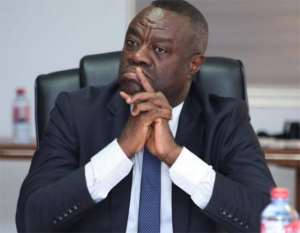 The Minister-designate for Tourism, Arts and Culture, Awal Mohammed, during his vetting by Parliament’s Appointment Committee on February 26, 2021, was asked if he knows of the existence of the biggest tree in West Africa, which incidentally happens to be in Ghana. His response, which came as a surprise to some members of the Appointment Committee, was ‘no’. Apparently, the Minister-designate has never heard of the big tree nor visited the place.

Mr Mohammed is not the only Ghanaian in this bracket. Many Ghanaians do not know or have never heard about this tree.

I have decided to use this opportunity to invite the Minister-designate to Akyem Kotoku, the land that hosts this huge international asset.

The ‘Oda Big Tree’, as it is commonly known, is believed to be the biggest tree in West Africa and the third biggest in Africa. The tree is of the Bako species and its botanical name is Tieghemela Heckle. However, the locals call the tree ‘Abako’.

It is located at Aprokumase in the Asene-Manso-Akroso District, approximately 18km from Akyem Oda in the Eastern Region. Although many believe the tree is located in the Essen-Apam Forest Reserve, documents at the Forestry Commission suggest that the tree stands in the Asubone Forest Reserve.

The tree is located in about five minutes’ walk from the road side into the Asubone Forest Reserve. Oral history has it that the tree was discovered by a hunter called Yaw Andoh in 1606. According to historians, several attempts were made in the past to cut down the tree, but to no avail. Different people who tried using different tools such as axe and chain saw to cut down the tree died in the process.

The only branch of the tree, that has ever fallen, fell in 1962. It is said that the tree has fruits that fall once in every 10 months. Although it is the biggest, there are similar species of the same tree in the Asubone forest.

In February 2005, the Ministry of Tourism and Modernization of the Capital City mooted the idea of developing the forest where the ‘Big Tree’ is located into a proper tourist site. A reception facility was built in about 20 minutes’ walk from where the tree is located.

In June 2018, Mr Kwadwo Antwi, the Chief Executive Officer of the Ghana Tourism Development Company (GTDC), said that his outfit has put plans in place to take over the ‘Big Tree’ from the Forestry Commission (FC). Mr Antwi disclosed that the GTDC is considering establishing a highway rest-stop with recreational facilities, accommodation, fuel station and properly managed lavatories for tourists and other visitors’ use.

“The GTDC will, however, continue to negotiate with FC to take over total control of the Big Tree in order to develop the place into a proper tourist site,” he is reported to have said.

In October 2018, the District Chief Executive (DCE) of the Asene-Manso-Akroso District, Alex Incoom, pleaded with the Forestry Commission to conserve the Asubone Forest Reserve which husbands the ‘Oda Big Tree’.

According to the DCE, “The Assembly is scouting for strategic investors to develop the location of the Oda Big Tree into a proper tourist site and the continuous felling of the trees in the forest is making the job difficult for them.”

Mr Incoom again stated that the assembly was looking forward to collaborating with the GTDC to enhance talks with the FC in order to get the Commission to fast-track the processes of releasing the ‘Big Tree’ to the Ghana Tourism Authority and the assembly.

In May 2020, officials of the Asene-Manso-Akroso District Assembly (AMADA) and the GTDC visited the Benkumhene of Akyem Kotoku Traditional Area and Chief of Akyem Manso, Obrempong Sintim Poku III, to introduce a contractor who would be developing the area to the traditional authorities. The contractor, Malin Construction Limited, was expected to spend three months in developing the area into a full tourism space.

The DCE, Alex Incoom, said a memorandum of understanding (MOU) was being signed between GTDC, AMADA, the Traditional Council and the Forestry Commission for the development.

Obrempong Sintim Poku III lauded the Akufo-Addo government for being faithful to the people of the area. He described the information about the development of the tree as “good news”.

“During the erstwhile Kufuor era, the late Jake Obetsebi-Lamptey came to develop the place in a small way. Unfortunately, very little attention was given it after the Kufuor administration left power in 2008. I am happy that we are going back to it again under another NPP government,” Obrempong told the media.

He assured the contractor that the traditional council will do everything possible to assist him in developing the area.

The project, according to the GTDC, was in line with the government’s vision of developing and upgrading tourist sites to improve the attractions and enhance the visitor experience.

Some five months later, President Nana Addo Dankwa Akufo-Addo, in a campaign tour to the Eastern Region in October last year, inspected the ongoing re-development of the Big Tree Tourist site. Welcoming the President to the project site, the CEO of GTDC informed the President that the Receptive Facility which was initially developed by the late Jake Obetsebi Lamptey, the then Minister of Tourism and Modernization of the Capital City in 2004 was left to rot and that the GTDC had decided to re-develop the facility as a matter of priority given its impact on the local community and economy.

Expressing his appreciation for the work done, the President commended the Board Chairperson, Martin Mireku, the CEO and his team at GTDC for a good job done and asked them to ensure that the project was completed on time.

Mr Minister, even though the project was supposed to be completed within three months, as promised by the contractor when he met with the traditional leaders, it is already 10 months and the project still remains uncompleted.

So, you may want to take a critical look at that project and I believe it will go a long way to boost the tourism revenue of the country. But even before you settle down in your office, you may want to pay a visit to this historic site.

Mr Minister, let me, therefore, welcome you, in advance, to Akyem Kotoku as you visit the Big Tree.

Why go to the IMF when SSNIT can give you the money you need...
48 minutes ago