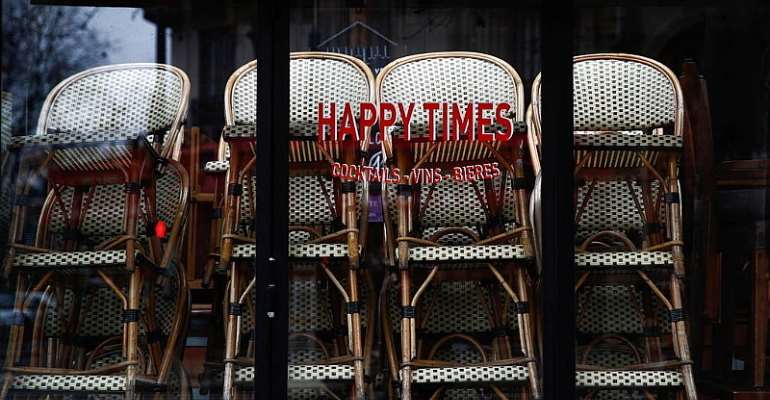 Dozens of restaurants in Paris open their doors illegally for customers in violation of a strict Covid closure in place since 30 October. According to local media, many eateries take in dozens of clients, including public servants and trusted locals, through their back entrances every lunchtime.

The rules, imposed on 30 October at the height of the second wave of Covid-19, are flouted on a regular basis, says the newspaper.

Nicknamed “fork gangsters” (gangsters de la fourchette), the illegal lunchers quietly pass on their secret addresses, which leads to "new friends, and then friends of friends", says one restaurant owner in Paris's 12th arrondissement, who serves up to forty lunches every day.

Some more upmarket establishments welcome politicians and businessmen. "I can choose from 19 restaurants, in upmarket districts," a guests at a restaurant in the 6th arrondissement told Le Parisien.

Another restaurant, close to a courthouse, serves its traditional clientele: police officers and magistrates.

Regulars enter back rooms directly through the service entrance, which is not locked, according to the report. The paper's journalists found menus with “three choices of starters and main courses” at the cost of 20 euros.

Restaurants, forced to close a second time due to the coronavirus pandemic, are promised up to 10,000 euros in aid by the government. But for many in more expensive parts of Paris, this does not even cover the overheads.

France's fines for flouting Covid-19 rules include a minimum 135 euros for individuals, and up to 15,000 euros for restaurants, which also face the threat of permanent closure.

New daily virus infections remain high. On Friday, France registered 23,292 new cases, surpassing 3 million since the beginning of the epidemic. Over the past few weeks, numbers have been slowly rising after a relative dip at the end of November, after the second lockdown was imposed on 30 October.

The daily death rate has plateaued at around 400 and does not appear to be easing. Meanwhile, the positivity rate among people tested is growing slowly at around 0.1 percent per day. As of Friday, seven percent of people tested were positive for the coronavirus.

French Health Minister Olivier Véran has said another lockdown "would probably become an absolute necessity" if circulation of the highly infections UK variant of the virus increased significantly.

The spread of the new strain across France will likely be a "determining factor in the government's strategy in the coming days and weeks", he said.

Metropolitan France is currently under a strict 6pm-6am curfew, with people only allowed to leave their homes during these times for a valid reason and with an exemption certificate.