'Corrupt Mahama' exonerates himself to 'Saint NPP' - What a massive challenge! 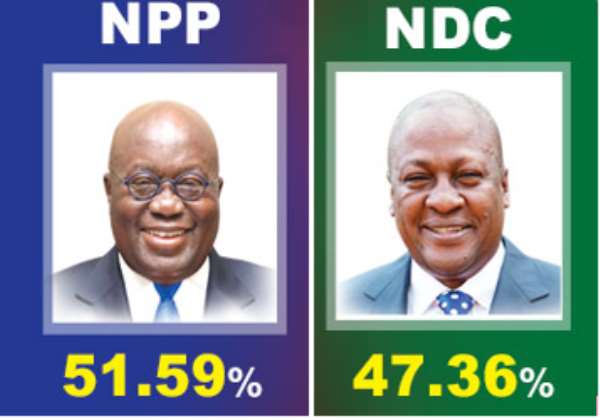 Events and orchestrations that occurred prior to the erstwhile general elections which painted the opposition National Democratic Congress (NDC) as the most corrupt party in Ghana that will lose the elections by a 20% margin or higher proved to be a plank. Some members of the ruling New Patriotic Party (NPP) actively tried to tarnish the image of ex-President John Dramani Mahama, who was the NDC presidential candidate for 2020 electioneering.

The just ended elections was a neck to neck wrestling between a fierce fighter on a lion skin and an weary elephant on a field. Indeed, it was a clash of two titans. It was no easy chop as what was anticipated by the NPP before the December 7 general elections. The Electoral Commission (EC) declared Nana Addo Dankwa Akufo- Addo the winner with 51.59% of the votes cast, while former president Mahama obtained 47.36% of the votes.

On the surface, one may think that the gap between the NPP and the NDC was over 4%. However, according to Ghana's constitution or electoral laws, a candidate requires 50% +1 vote to win the presidential elections. Nana Addo obtained just over1.5% extra votes and won by a slim margin. This is a serious concern to the NPP as they also lost many seats in parliament.

On the other hand, Mr Mahama obtained 47.36% and was just a little over 2.64% short of winning the presidential elections. Candidate Mahama and the General Secretary for the NDC, Mr. Johnson Asiedu Nkatiah urged their supporters to "go out and jubilate" as if the NDC had won.

Observers think that the NDC least expected to gain up to 47% of the presidential votes. They were so close to unseating president Nana Akufo Addo. The parity in parliament also added enough course for jubilation. They would not concede defeat easily for the sake of political propaganda.

The conclusion of the whole matter showed that former president John Mahama retains popularity and a massive support which baffles the party of the sainthood (NPP).

It would be recalled that in 2016, Nana Addo Dankwa Akufo- Addo, beat the then incumbent, President Mahama by more than a million votes and the NPP obtained unassailable majority in parliament.

However, in 2020, the parliamentary majority split equal, according to Ghana MultiMedia Group's projections (at least135 to each side), except the other contested constituencies make the difference. Also, the marginal vote difference between the NPP and the NDC has slipped by half to just over 500 000 votes.

The NPP could easily have lost the just ended elections with all their confidence. Therefore, the self-righteous party (NPP) must do their homework well before 2024 general elections.

Stay alert for the next articles: (1) Why the NPP sank a bit

(2) Why must the losing candidate concede defeat before EC declares a winner (ref. EC undermines its Mandate)

(3) No more thanksgiving appointees Nana Addo (ref. Ministry of Zongo Development, Office of the SP etc, a financial lost to the state)

13 Nigerians who engaged Police in gun battle at Weija reman...
9 minutes ago