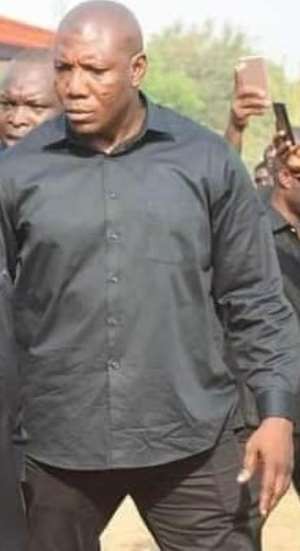 Madam Freda Darko, a frustrated businesswoman has made a passionate appeal in a petition to the President, HE Nana Akufo Addo to stop one of his bodyguards, Prince Mohammed from bullying her.

According to the businesswoman, Mohammed is allegedly trying to forcibly take her land at Shiashie which she bought about 21 years ago.

In the petition, she said hearing that Mohammed had sent land guards to the land and some form of construction had started, she went there to speak with them but one of them attempted to assault her.

“They even assaulted my son whom they saw taking a video of what was going on on the land. He had to buy some pain killers from the pharmacy since one of them slapped him heavily”, she recounted.

Showing pictures of the land guards who had cut down all trees which were planted about 21 years ago for her company for demarcation purposes, Madam Darko pleaded with President Akufo-Addo to call Mohammed to order.

Mohammed, according to her, had threatened to use state apparatus to torment her till she runs away from the land.

The land in question, according to authentic documents sighted originally and genuinely belongs to Madam Freda Darko.

She bought the land in 1999 and has all official documents to show including all the land titles.

She revealed that after some years a man who introduced himself as the Shiashie Chief known as Nii Opremele also popped up claiming ownership and even told her that he had won a case against Mr Tetteh Apan of Apankye We stool landowners.

Nii Opremire claimed that the judge ruled in his favour and the judgement had stated that Madam Freda should prepare an ‘ATONEMENT OF TENANCY’ to him (Nii Opremle).

“We performed the ‘ATONEMENT OF TENANCY’ to him and I paid for all the three plots as he claimed which means that just one plot I bought, I have paid two feuding parties. I did all documents to cover it and they have come back this time, they have the backing of some people in top positions in the current government.

"...I bought a big sheep, yam and some other items meant for the ATONEMENT OF TENANCY and paid all the money he demanded,” she noted sadly.

She continued, "After all these, Nii Opremire went on to give a portion of the land to someone and the case is in court now."

She stressed in the petition that the lawyer for the people to whom the land has been wrongly given is the current Deputy Minister of Justice and Attorney General, Hon. Godfred Dame.

She said her efforts to attain Justice has incessantly been frustrated.

She is worried that Mr Dame has been using Akufo Addo, Prempeh, and Co. law firm which is still on the case, noting that there can never be Justice when he has an interest in the case.

"This is a case of bullying, conflict of interest and abuse of power and I am pleading with our President Akufo-Addo to come to my aid,” Madam Freda lamented.

She lamented that the mischievous manner in which Mr Dame made her a party to a court case when she was not and managed to get her bank accounts garnished still baffles her and called on the President to let him stay off the case.

She has also appealed to the Chief Justice, Justice Anim Yeboah to arrange a video coverage of the next court proceedings on the land since there is a clandestine attempt by some individuals to frustrate her efforts to secure justice and forcefully steal her land.

According to her, most of the lawyers she engaged are lured to tamper with her evidence alleging that some staff of the court has deliberately been destroying her files.

She narrates the whole situation in this video: