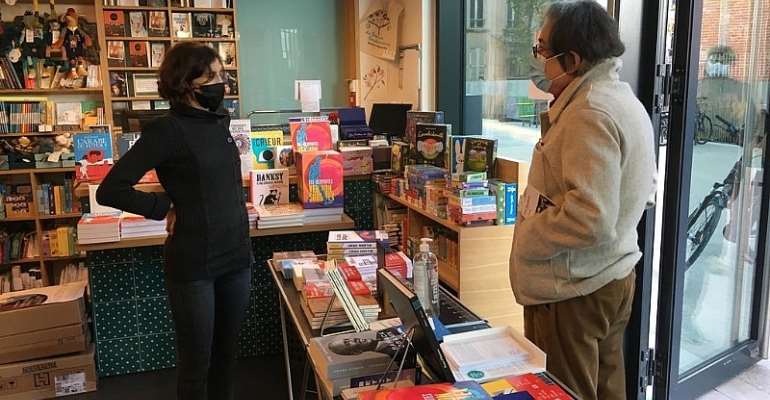 French bookshops are hoping to be able to reopen when President Emmanuel Macron announces how the country will adapt to an improving Covid situation Tuesday. Of all small businesses affected by a second lockdown, bookshops have drawn particular attention and support as symbols of French culture and resistance to Amazon and other web giants.

On a Friday mid-afternoon in the Paris region suburb of Bagnolet, customers queue outside bookshop De Beaux Lendemains to pick up their orders.

“I abhor Amazon,” says customer Gabriel Le Doze as he waits at the table at the entrance for his order to arrive. “It's important to support local businesses. If not, our cities will become deserts, and we'll be like hens in cages.”

Beyond the table, staff move through the shop, picking up orders and, when the flow of customers slows, sorting through boxes of shipments and respond to queries, all part of the “click and collect” system introduced for this confinement.

“There's a lot more to manage,” says bookseller Rosalie Abirached. “we're so submerged with emails, phone calls and customers coming to pick up orders that I haven't had time to organise” she says, gesturing at cardboard boxes stacked around the shop.

Forced to close
For the extra work, the system has allowed De Beaux Lendemains and many of the country's 3,500 bookshops to keep operating since the new lockdown took effect on 30 October.

“Booksellers wanted to be considered essential services,” says SLF delegate general Guillaume Husson. “Books were one of the last points of access to culture with theatres, museums, cinemas, concert halls and galleries all closed.”

The government did not take the same view, even fording large supermarkets to also close their books sections, but click and collect emerged as a compromise.

The SLF estimates about 1,500 shops have the online presence to use the system, allowing them to maintain 25 to 50 percent of usual activity with online orders and deliveries, which usually account for less than 5 percent of business. But even in that group there is a difference.

“Solidarity and even activism for independent booksellers has been stronger for local bookshops than larger shops in town centres, where the human relations aren't as strong,” Husson says.

Cultural exception
Support went further. Authors wrote open letters and a supermarket chain offered online support. Many in the industry now hope and expect Macron will announce Tuesday they can reopen for the Black Friday shopping day this week.

Abirached sees this support as having to do with the perception that bookshops are particularly threatened by US web giant Amazon.

“Amazon sold books before it sold anything else, so we were the ethical and commercial opponents from the start,” she says. “The Covid situation opened the way for Amazon, which already benefited from unfair competition.”

Related is the made-in-France legal and political concept of cultural exception, which emerged in the 1990s to keep cultural products exempt from many rules of international treaties and trade agreements.

“With the cultural exception we have in France, there's a tendency to sanctify this profession as having a mission, for transmission,” Abirached says. “There's truth to that, but it's important to relativise a bit. We're shopkeepers like any other.”

135-euro fine
Abirached's shop drew attention of a different sort last week, when a police patrol imposed a 135-euro fine for breaching rules, citing the position of the table and for having more than one person in the shop.

“At that moment, there was a mother with her two children. We weren't about to leave the children outside,” the bookseller says.

“There were also four people outside, and the officers said we had the responsibility to ensure people don't gather in public space, that it was our job to police them, which was a bit strange.”

A Facebook post about the incident drew thousands of messages of support from residents and from local officials, as well as media attention, including an article in newspaper Libération.

The SLF determined no rules had been broken and noted a similar incident involving officers from the same police station at a bookshop in neighbouring town Les Lilas the previous week. The fines have been cancelled in both cases.

“I think there was a bit of zeal, and we argued to the police station that it had no doubt other things to do than to go pick fights with bookshops,” Husson says.