Mahama Has No Legacy In The North, They Chopped All The $100million SADA Cash – Bawumia 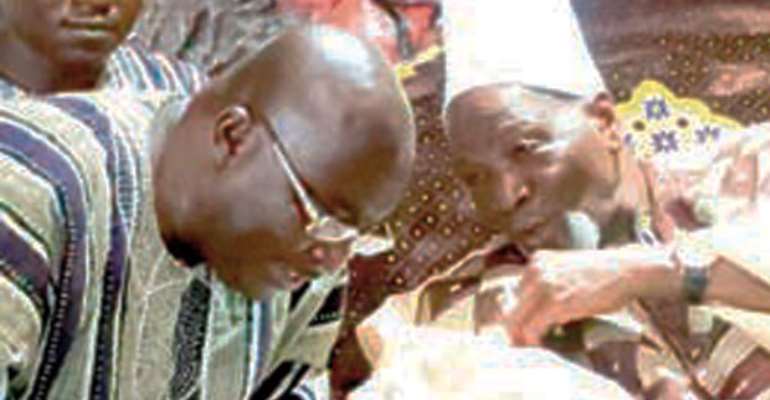 Vice-President Dr Mahamudu Bawumia has hit at former President John Dramani Mahama for failing the people of the northern part of the country during his tenure.

According to the Vice-President, the entire Northern Region cannot point out any legacy of former President Mahama, an indigene of the area just like Dr Bawumia, saying that he could not complete a single road project under his regime.

Dr. Bawumia threw the political punch at Yendi in the Northern Region when he commissioned two six-unit-classroom storey blocks and dormitory at the Yendi SHS on Saturday as part of his campaign tour ahead of the December 7 general election.

“He couldn't complete a full road in eight years in the Northern, Upper East and Upper West regions; John Mahama, at least in the Northern Region, does not have any substantial legacy,” he fired.

“Can you mention any project under SADA in the Northern Region after investing $100million? They chopped all the money and we don't have even one project to show,” he said.

He advised the NDC to rather march for 'SADA guinea fowls' and not for probity and accountability as they claim, saying “they should be marching for the flying guinea fowls; bus branding scandals; they should be marching for the airbus scandals, these are the probity and accountability Ghanaians want to see.”

Dr Bawumia stressed that when former President Rawlings was alive, members of the NDC were disrespecting him, calling him the 'barking dog', 'the Volta god' and got 'babies with sharp teeth' to attack him, adding “today, now that he is dead, they are saying they are marching for probity and accountability; their march should be named the march for hypocrisy and dishonesty.”

The Vice-President reiterated that the government of President Akufo-Addo was delivering on its promises; adding that without the NPP administration, Ghanaians would not enjoy good policies such as the Free Senior High School being implemented.

“John Mahama said the Free SHS was not possible, that it was 419 and that we were lying to the people of Ghana, today he says we should give Ghana back to him; but we cannot trust Free SHS with him. Today thanks to President Akufo-Addo, 1.2 million students including students of Yendi and Dagbon State SHS are enjoying Free SHS,” he fired, adding, if you have John Mahama in office you will not have Free SHS, no PFJ, no NABCO, no One Constituency One Ambulance and no 1D1F, so is this the person you want to come back?”

He said the NPP government was establishing free WiFi to all Senior High Schools in Ghana to boost teaching and learning, saying “the work is almost completed and we are giving the senior high schools free WiFi, we are giving all the colleges for education free WiFi , district education offices, all tertiary institutions, technical institutions and nursing training colleges will all get free WiFi, and this is the government that thinks about your future.”

Dr. Bawumia assured the King of Dagbon, Ya Na Abukari II and the good people of Dagbon that the NPP government was committed to enhancing infrastructure in the education sector in the country for which they built two six-unit-classroom storey blocks and dormitory at the Yendi SHS.