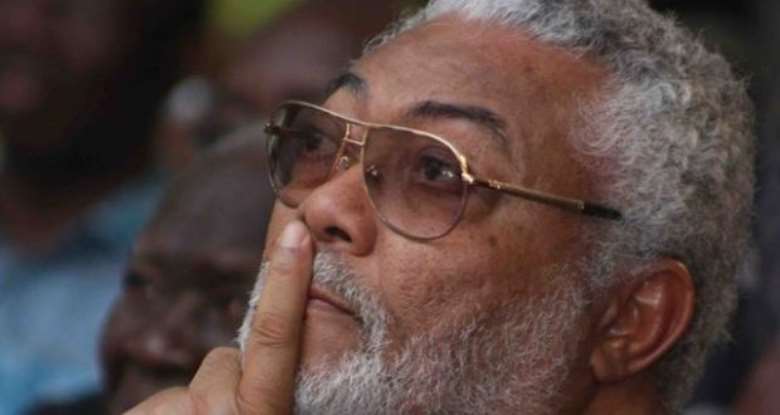 Shortly had Radio Ghana come on the air at around 5.30 a.m. On 4 June 1979 when a breathless voice, that of “Jerry Rawlings" seized the microphone and said: “The boys have just released me out of prison....... I want all junior officers and the other ranks to meet.

Nicholson Stadium will be our venue.”

Rawlings then mentioned the names of some specific officers and other ranks whom he said he wanted to be at the meeting.

It was unbelievable! Twenty-four hours or so earlier, Rawlings had been on trial at a court-martial, answering charges relating to the “incident” of 15 May 1979, which some had classified as an attempted coup but which, in reality, was nothing more than Rawlings seizing some armoured cars in complicity with some other ranks of the Armoured Reconnaissance Squadron of the Ghana Army.

Rawlings had not done much forward-planning, such as lining up soldiers from the infantry battalions to give him support; he had not even managed to mobilise his own squadron of jet fighters. His hope had been that soldiers would spontaneously rally to his side if they heard that action was in progress to change the Supreme Military Council (2) Government.

But he had misread the political situation. The SMC(2) headed by General Frederick Akuffo had begun to plan to install a properly democratic government in Ghana. It had allowed press freedom to operate – to the extent that the state-owned Daily Graphic was able to print, almost word for word, everything Rawlings had said at his trial.

His argument, as told to the Court Martial, was that the senior echelons of the Ghana Armed Forces had run the country so badly that they had brought disgrace to the entire Armed Forces. Soldiers were now afraid to identify themselves as soldiers to members of the public because they were openly insulted when they did so. Almost every essential commodity was in short supply in the country. But there was a widespread belief that the senior officers appointed to head Ministries and state institutions, were not only making a great deal of money for themselves but were favouring their friends – especially female friends – in the award of import licences.

These “friends” and frontmen and women were able to bring in goods from abroad, which they sold at hugely inflated prices, in a system, variously called kalabule or gyinabu. The system had turned people who did not possess any skills or do anything important to society (but who had cultivated good connections with officers in government) into wealthy individuals overnight. Meanwhile, prices were rising so high in the markets that ordinary soldiers and workers

were suffering from terrible hunger day. Something had to be done to redeem the honour and dignity of members of the Armed Forces.

Rawlings then cleverly told the court-martial to free all the other ranks whom he had importuned to support his rebellion. They had acted under his orders, he emphasised. If there was to be any punishment, it should be placed on his head and his alone.

The publication, on the front page of the Daily Graphic, of these sentiments expressed at the court-martial by Rawlings, turned him into an overnight hero, especially among the lower ranks of the armed forces. Here was a man who accepted responsibility for his actions and wanted to be punished for them. He was a great man of honour for absolving the juniors who had come under his influence.

Apparently, there had been a junior officers movement in the armed forces which had been discussing the state of affairs in the country in secret over a period of years. Their main conclusion – apparently – was that the senior officers had “disgraced” the armed forces by using the positions that they had captured, upon overthrowing the civilian government of Dr Kofi Busia in January 1972. So the senior officers needed to be “purged”. Nothing much else – such as the type of economic system that should replace the kalabule phenomenon, had been agreed upon amongst them.

There is little doubt that the eloquence deployed by Rawlings at the trial succeeded in creating a heroic figure out of him in the eyes of many soldiers. Meetings began to be held about what was to be done to prevent him being executed for inciting a rebellion. As a result of these meetings, a band of soldiers had decided to release him from his place of incarceration, in the early hours of 4 June 1979.

On releasing Rawlings, the soldiers drove him to Broadcasting House, where they managed to put him before a live microphone to make the stupendous announcement that he had been freed by other ranks in the armed forces.

After the announcement by a breathless Rawlings continuous military music was played on the radio. It was reminiscent of 24 February 1966 [ when Kwame Nkrumah was overthrown by the soldiers who formed National Liberation Council (NLC) headed by General Joseph Ankrah]; 17 April 1967 [Lieutenant Samuel Arthur attempts to overthrow the NLC fails and is executed]; 13 January 1972 [Colonel (as he then was) I K Acheampong overthrows the Progress Party Government and forms the Supreme Military Government]; and 5 July 1978 [General F W Akuffo overthrows General Acheampong SMC and replaces it with SMC2].

Gov’t will build houses for displaced victims of Appiatse ex...
7 minutes ago

‘My courtroom is as hot as oven’ – Justice Kwoffie laments f...
7 minutes ago