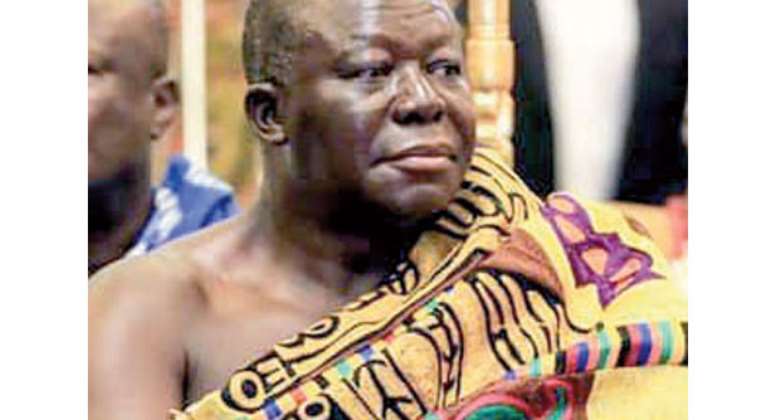 In this regard, he has sternly warned interested stakeholders, who are supposed to work and ensure a befitting burial and funeral rites for Mr. Rawlings, to peacefully work together to avert confusion.

Describing the late Mr. Rawlings as a great statesman who dedicated most of his lifetime on earth to serve his country, the Asante King stated emphatically that Mr. Rawlings deserved a peaceful transition to eternity.

The Asantehene was speaking when the family of the late ex-President Rawlings, visited him at the Manhyia Palace in Kumasi on Thursday to formally inform him about the unfortunate passing on of the ex-President.

“There shouldn't be any confusion in his absence, we should all unite and give him a peaceful and befitting burial and funeral rites that he truly deserves after his significant services for the state,” Otumfuo advised.

The New Patriotic Party (NPP) has been accused by the opposition National Democratic Congress (NDC) of hijacking the funeral activities of their founder Jerry John Rawlings who died last week.

The Asantehene, posthumously showered tons of praises on Mr. Rawlings, recounting the significant roles that he played to help deepen the current democratic dispensation.

He particularly remembered Mr. Rawlings for his important roles in the peaceful and smooth transition of political power from him (Rawlings) to another former President, John Agyekum Kufuor on January 7, 2001.

“Although Rawlings came into political limelight as a military man, he later contributed immensely to help deepen the democratic rule that we are enjoying today,” the Asantehene said.

“I remember after the 2000 elections, when he (Rawlings) was supposed to exit political office. He told me to arrange a meeting between him and Kufuor so that we could all arrange for a peaceful transition of power.

“This was a former military man, who has transformed over the years to love and appreciate democratic system of government. This laudable action that he took helped to ensure the peace and unity in the country at the time.”

According to him, Mr. Rawlings lived a fulfilled life, which helped to spread his name and that of Ghana across the globe.

The Asantehene also praised Mr. Rawlings for having absolute respect for the Golden Stool that he (Otumfuo) occupied, recounting how he (Rawlings) always listened to his wise counsel in political office and even after he left office.

“I worked closely with Mr. Rawlings when he was the President. In fact, he was noted for always consulting me for advice on crucial national issues and that was a sign of a leader that respected tradition and culture,” he said.

Otumfuo also added “After he left political office, whenever he had issues with either President Kufuor or late President Mills, immediately I called him to let sleeping dogs lie to ensure peace, Rawlings would instantly listen.”

No Beef With Kufuor

He said contrary to reports that there was animosity between Messrs Rawlings and Kufuor, both had mutual respect for one another, saying “Rawlings did not hate Kufuor.”

The Asantehene later wrote an emotional farewell message in a book of condolence in honour of the late Mr. Rawlings, which was brought to him at the Manhyia Palace by the bereaved family.

The bereaved family informed Otumfuo that they were yet to decide the date and venue of the burial and funeral rites for Mr. Rawlings, promising to update him when the decision was taken by the family.

The Asantehene also assured that the Manhyia Palace and Asanteman would support to make the burial and funeral rites of Mr. Rawlings peaceful and successful.

More from Headlines
ModernGhana Links
Ahafo: Car crash kills 7 at Sankore
Ghana left with no other option than return to IMF – Mahama
National Cathedral: See how much and which churches have donated towards the project
TOP STORIES