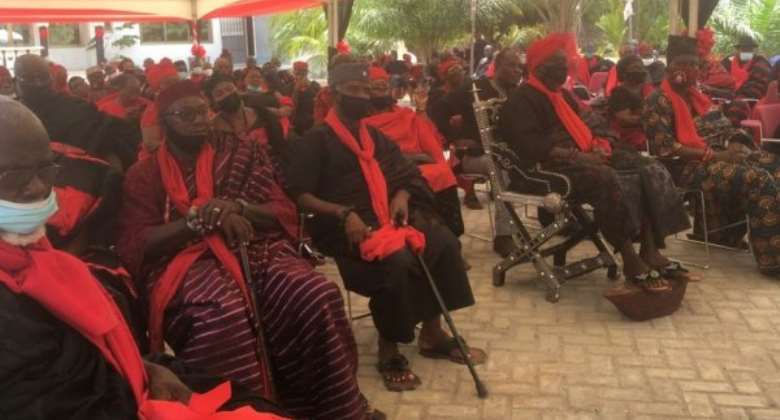 Torgbui Addo VIII, Paramount Chief of Klikor has said he could not find the exact words to describe former President Jerry John Rawlings whose death he termed as a great loss to humanity.

He said the first President of the country's fourth Republic was selfless, humble and concerned with things of benefit to others throughout his life on earth and hinted that he might not get over his loss in a hurry.

Torgbui Addo spoke to the Ghana News Agency on the sidelines of a meeting between the leadership of Volta Region National Democratic Congress (NDC) and the Anlo Traditional Council at the residence of Torgbui Agbesi Awusu II, the Awadada of Anlo at Woe.

The visit of the NDC delegation which included; regional executives of the party led by their Chairman, Mr Henry Ametefee and the Volta Caucus in Parliament led by their Chairman, Mr Emmanuel Kwasi Bedzrah was to confirm the demise of the son of the land from the durbar of Anlo chiefs drawn from Ketu South, Ketu North, Akatsi South, Akatsi North, Keta and Anloga Districts and to commiserate with them on their loss.

The Paramount Chief of Klikor could not help, but speak with awe, the kind-hearted, peaceful and humble man Mr Rawlings was and admitted, “in fact, I don't know the right words to describe the icon.”

“He's so generous and what's more, he won't even make noise of it. This car I'm using now, he got it for me. I was home one day and someone drove it to me as a gift from Mr Rawlings. He would call to check on me and my family. Not long before the sad news of his death, he called my daughter to enquire about when I was installed. Every time, he's concerned about someone and never caring about himself.

He was so respectful and humble. Look at what he did the last at a funeral in the Tongu area. He went down on his knee before me just to seek permission to depart from the ceremony ahead of time. He's our former President and also chief in our land. It's hard for me to imagine that we lost him. We have a lot to learn from him.”

Mr James Gunu, NDC Volta Regional Secretary said the party would collaborate with the Anlo Traditional Council to give Mr Rawlings a befitting burial noting, several activities were lined up in memory of their founder.

He said of all the legacies Mr Rawlings left was also the NDC he founded on the principles of probity and accountability, which he said must be upheld and called on Ghanaians to ensure the comeback of NDC into power saying, that would be the best way the country could honour the memory of the late former President.

The Anlo Traditional Council noted that following the formal communication of the demise of their son, Mr Jerry John Rawlings to them by the family, a delegation would be sent to the family in Accra on Friday, November 20 to partake in deliberations leading to arrangements to send the late Rawlings to his ancestors.