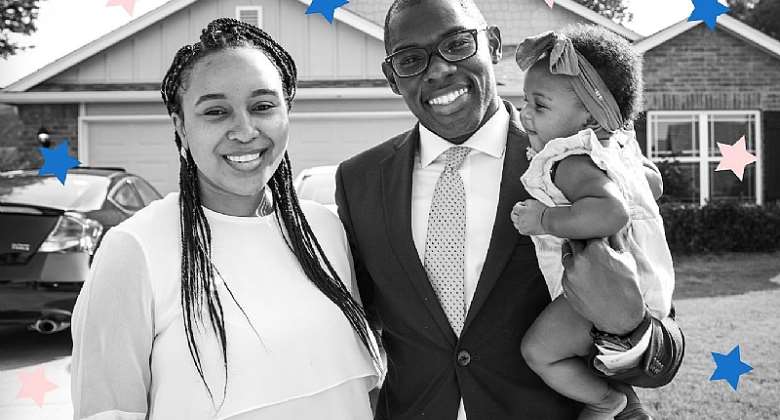 Kojo Asamoa–Caesar became the first Ghanaian-American to receive a major political party nomination for federal office in the United States (US) when he was nominated to run for congress after winning the primaries in his district as a black man, a feat that hasn’t happened in over a century in that district.

Mr. Asamoa-Caesar is TheAfricanDream.net Hero of COVID-19 for the month of November 2020.

The Ghanaian-American politician based in Oklahoma and a member of the Democratic Party was nominated to represent Oklahoma’s 1st congressional district of Tulsa after elections on 30, 2020 . And Even though he lost to Kevin Hern, the incumbent, Kojo’s candidature drew a lot of positive attention given its historical antecedents.

So first of all he became our COVID-19 Hero here at TheAfricanDream.net just for the mere fact that he dared to run for office as a Democrat in a place like Oklahoma’s 1st district which has had 19 representatives since it was created in 1907, none of which has been black. We thought it was more interesting especially when the fact is considered that of these 19, only 7 were Democrats and the remaining 13 were Republicans.

Since the second half of the 20th century, this district has leaned increasingly Republican with the last 5 representatives coming from that party since 1984. For a black man to dare to dream this big and run for office there is truly inspirational, a dare that got a lot of his native Ghanaians behind him, the continent of Africa as well, and over 109.454 native Oklahomans who cast their ballots in support of him.

Kojo raked 33% of the total votes in the district in the November 2020 elections, before that he won the primaries in there 63.6%, both margins are the largest ever recorded in the district in over 3 decades. The fact that he put his job as a lawyer and a kindergarten school teacher on hold for almost a year in pursuit of his ambitions to serve speaks to his character.

For him, it is not merely about winning office, but passionately about making the American dream accessible to all hardworking honest people living in the US, whether they be Americans or not.

He is a genuine people’s man, the reason why he is wanted back: “many electorates have entreated me to come back and contest for that office again and I will yield to the call in the right time,” he disclosed to TheAfricanDream.net, saying, it might be for some other kind of office, “but you will certainly see my name on the ballot again…“

“There will come a moment for the need for a messenger with the message that I am well suited to deliver, and when that call comes I will answer it.”

“I spoke my truth; I shared my story and my values. I didn’t come out as fake. I didn’t pretend to be something that I wasn’t and I think people are drawn to that. People are drawn to authenticity and there are too many fakers and pretenders in our politics nowadays,” said Kojo Asamoa-Caesar who felt people got drawn to his candidature because of the authenticity in his campaign message.

On behalf of TheAfricanDream.net, I asked Mr. Asamoa–Caesar whether he had anything to say about the upcoming elections in Ghana on December 7, 2020. He did, by calling for the elections to be free and fair and for losers in the elections to concede defeat peacefully, whether in the presidential or parliamentary race, as the office was bigger than whoever occupied it. Such acts will set a good example for Ghana’s growing democracy and Africa as a continent.

“If we want to advance our democracy and ensure that there is trust in our institutions then leaders have to be committed to putting the interest of the country before party or self.“

This is not the end, it is only the beginning, and like Arnold Schwarzenegger, Kojo Asamoa-Caesar-Caesar tells his supporters worldwide that “I will be back!“

Learn more about Kojo by watching the video of my interview with him here: https://youtu.be/t68ZUZJpHz4