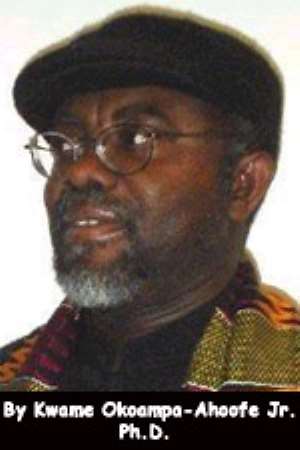 I was not the least bit amused to learn that the National Democratic Congress’ Member of Parliament for the North-Tongu Constituency, Mr. Samuel Okudzeto-Ablakwa, had publicly disclosed that some members of the secessionist Western Togoland Terrorist Organization (WTTO), that is, the military wing of the so-called Homeland Study Group Foundation (HSGF), led by an 85-year-old man by the name of Charles Kormi Kudzordzi – alias Papavi – had approached the Overlord of Dagbon, Yaa-Naa (Mahama) Abukari, II, to solicit the support of His Majesty for the at once morally and psychologically depraved and politically benighted secessionist agenda of these disgruntled and grossly misguided saboteurs of the territorial integrity of the Sovereign Democratic Republic of Ghana (See “Why Yaa-Naa Chased Out, Banned Separatists from Dagbon” MyNewsGh.com / Ghanaweb.com 10/6/20).

I was not the least bit amused or impressed by Mr. Ablakwa’s disclosure because the National Democratic Congress’ Parliamentary Minority Spokesperson on Foreign Affairs has no enviable track-record of fiercely fighting against the subversive activities of the Western Togoland Terrorist Organization. Indeed, not very long ago, for example, a local radio station in the North-Tongu Constituency known for broadcasting programs reportedly aimed at destabilizing the country was shut down by the Minister of Communications, Mrs. Ursula Owusu, and the key operatives of the National Security Agency (NSA). There is also no evidence on record indicating that, indeed, Mr. Ablakwa had played any significant role in bringing such patently seditious broadcasting or programming fare to the attention of the Government. So, why has Mr. Ablakwa suddenly turned himself into a policeman or a national security watchdog in the case of the allegedly secret attempt by the Western Togoland Terrorists to seek audience and the support of Yaa-Naa (Mahama) Abukari, II? Something simply does not add up here.

Disclosure: Yaa-Naa Abukari is my in-law, by way of my cousin, the late Nana Kwasi Apeakorang, 73, a mason by profession, who died a couple of weeks ago in the Okyeman capital of Kyebi. Opanyin Apeakorang, I have been told, was married to one of the daughters of the King of Dagbon. As of this writing, funeral and burial arrangements were still in progress. The late Mr. Apeakorang was also named after my paternal great-grandmother, a descendant of the Asante-Juaben Royal Family and cousin to Dr. JB Danquah, by the name of Nana Adwoa Apeakoramaa of Kyebi-Aburaso. May Nana Kwasi Apeakorang’s soul rest in perfect peace.

Of course, I stand to be corrected in the matter of the apparent abject lack of any significant contribution of the North-Tongu NDC-MP towards the crucial maintenance of peace and security in both Mr. Ablakwa’s own constituency and the Volta Region at large. What I am well aware of, like many an avid observer of the national political scene, is that Mr. Ablakwa has sparingly or occasionally made some glancing remarks regarding how he was at variance with the secessionist political agenda of the Western Togoland Terrorist Organization, whose subversive activities have resulted in the considerable loss of lives and the destruction of state-own property. Which, of course, is all well and good. I am by the latter statement, of course, referring to Mr. Ablakwa’s public statement of being at variance with the subversive activities of the Western Togoland Terrorist Organization.

I also find it to be rather absurd that the operatives of the Kudzordzi Gang would so brazenly presume to insult the intelligence of arguably the second most powerful traditional ruler of Ghana. How, for instance, did these so-called Western Togolanders suppose that they could draw the Yaa-Naa so cavalierly and facilely into the confidence of their at once barbaric and troglodytic nation-wrecking agenda? Did these thugs, for even a split-second, suppose the great and good people of Dagbon to be in dire need of kowtowing to the ethno-political suzerainty or “protective” domination of the Benin-/Fon-originated operatives of the Western Togoland Terrorist Organization or the so-called Homeland Study Group Foundation?

One also begins to wonder what kind of political literature or curricular package “Professor” Charles Kormi Kudzordzi has been feeding his grossly misguided captives. It is healthily refreshing to hear several major chiefs or traditional rulers from the Volta Region, including yours truly’s own maternal grandfather, Deiga Kwadzo Dei, Paramount Chief of the Peki Traditional Area, take a firm and an uncompromising stance against the horrific barbarism of the leaders and paramilitary operatives of the WTTO. Especially refreshing, as well, was the very authoritative historical lesson delivered “Professor” Kudzordzi and his rag-tag band of killer thugs by Deiga Kwadzo Dei on the indigenous bona fide precolonial identity of the proud people of the culturally Enlightened Kingdom of Kreppi. This is the kind of Anti-Dementia Antidote that is most needed to redeem the febrile fantasy-afflicted Western Togolanders from their self-destructive funk of lunacy. Burp! Burp!

N/R: Over 300 suspected criminals arrested in military opera...
17 minutes ago