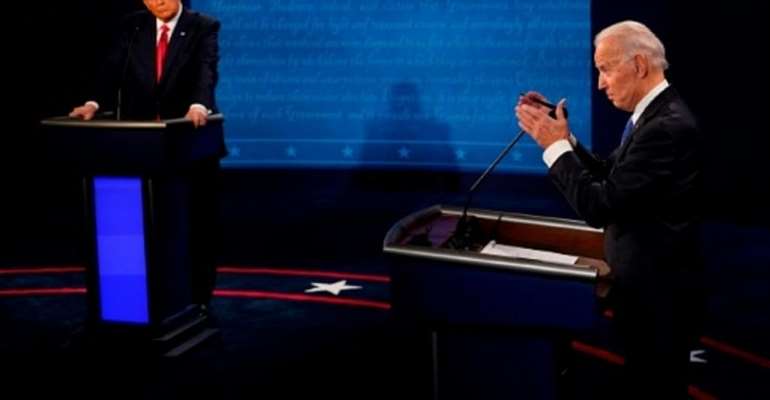 Thursday's final debate between President Donald Trump and challenger Joe Biden was a more civil affair than their messy first showdown. But that did not prevent the pair from clashing on everything from immigration to racism.

The handling of the coronavirus pandemic has been a key dispute between the two men since campaigning started.

On Thursday night, Biden pledged to get a grip on the virus that has killed over 220,000 US citizens, adding that "anyone who's responsible for that many deaths" should not remain president.

"We're about to go into a dark winter. A dark winter," warned the former vice president, vowing, "I will end this" -- though he didn't say how.

Trump, recovering from his own brush with the virus, offered his usual sunny take despite the recent surge in the number of cases.

Biden laced into Trump over the president's attacks on Muslims, insults against Mexico and his failure to condemn far-right extremists at the last debate.

"Come on, this guy is a dog whistle about as big as a foghorn," Biden growled sarcastically, in a reference to subtle, so-called "dog whistle" racism.

Trump, for his part, claimed his four years in office have been a time of historic improvement for African Americans.

"I'm the least racist person in this room," he said.

"Not since Abraham Lincoln has anybody done what I have done for the Black community," Trump added, referencing the US president who moved to abolish slavery in 1863.

Trump has always been dubious about the part played by humans in climate change and attacked Biden about his plans to transition the US away from fossil fuels and toward green energy.

"He thinks wind causes cancer," Biden said.
Trump took exception to that allegation, saying "I know more about wind than you do. It's extremely expensive. Kills all the birds. It's very intermittent."