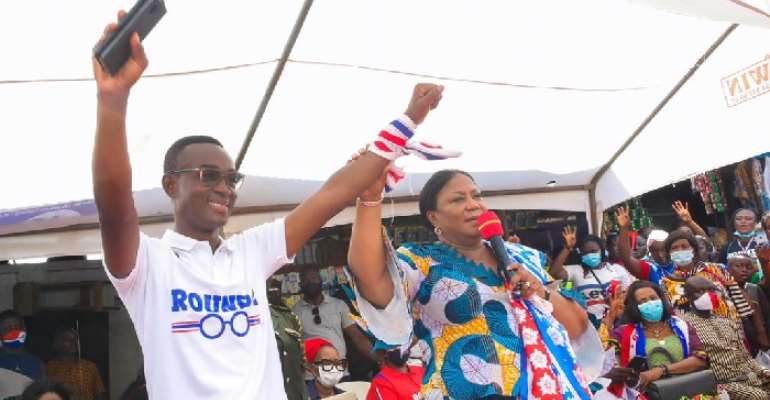 First Lady, Rebecca Akufo-Addo, has persuaded electorates in the La Dadekotopon Constituency of the Greater Accra Region to vote for President Nana Akufo-Addo and the NPP parliamentary candidate for the constituency, Joseph Gerald Tetteh Nyanyofio.

Addressing the public during her campaign tour of the constituency, she said Mr Akufo-Addo is determined to empower Ghanaians and create equal opportunities for everyone to harness their potential.

She indicated that this intention of her husband is what has led to the implementing of policies and projects that benefit the masses and not just a selected few.

“During the Covid-19 Pandemic Ghana was among the few countries in the world that provided free water for its citizens because of the good leadership of the President. Policies such as Free SHS, 1 District 1 Factory (1D1F), Planting for Food and Jobs (PFJ), and establishment of institutions such as the Coastal development Authority all points to the good intentions the NPP government has towards Ghanaians.

“Let us not be quick to forget the good things that the NPP led by President Akufo-Addo is doing for Ghanaians and vote for him on December 7,” she urged.

The First Lady’s tour took her to the La Traditional Council where she held discussions with the traditional leaders of the Constituency to seek their support for the NPP in the December 7 elections.

Mrs Akufo-Addo also visited the La General Market and the 37 Hospital Lorry Station where she interacted with traders who shared their challenges with her.

Mrs. Akufo-Addo said the government is working with the relevant institutions to strengthen the technical and vocational arm of education to make it possible for those who for various reasons dropped out of school in the past to go back to school to acquire skills.

At a grand durbar held in her honour at Manjaano, Mrs. Akufo-Addo advised the constituents to vote for a candidate and a party which has delivered on their promises despite heavy scepticism and cynicism.

She assured them of President Akufo-Addo and the NPP's ability to work to enhance their social and economic status and said the surest way for Ghanaians to witness the full transformation of Ghana is to vote massively for the NPP on December 7.

“We are on the path of progress and we are not turning back so on December 7 do not only vote but vote right by voting for the NPP,” she said.

NPP Chairman of La Dadekotopong, Kingsley Addison, said the NPP is the party of choice for the constituency.

“The massive turn out shows that come December 7 the NPP will win at least 60 per cent of the popular votes,” he assured.

NPP Parliamentary candidate for La Dadekotopon, Joseph Gerald Tetteh Nyanyofio, urged the electorate in the constituency not to see the up-coming election as normal but to go all out to vote because the NPP needs to continue the good works it has started.

“Do not heed to the lies of the opposition and derail the development the NPP government has brought to the country in its first term under President Akufo-Addo,” he said.

He said if they have forgotten what the NPP has done for them, they should not forget the money they would have borrowed to send their children to Senior High School (SHS) but for the Free SHS programme of the NPP government.

“Let us enter into houses and homes and preach the good works of the NPP to our neighbours,” he said.

Six die in accident at Hemang after car crashed into wrongly...
31 minutes ago