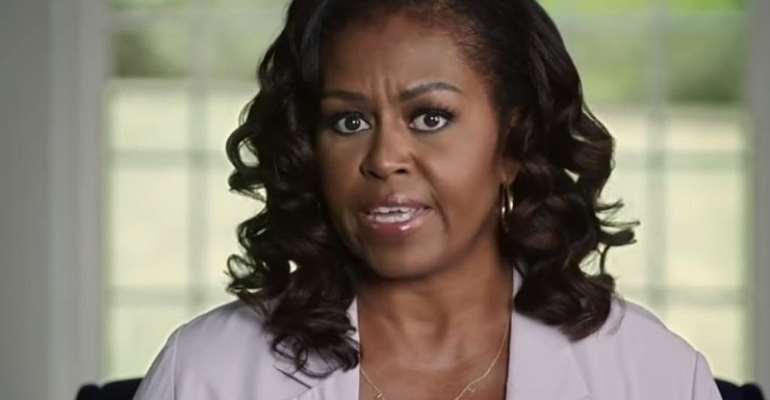 Former first lady Michelle Obama on Tuesday urged voters to reject Donald Trump and elect Joe Biden, who she lauded as the candidate who can lead the country out of the coronavirus crisis and address racism.

In a 24-minute video, former first lady Michelle Obama made an impassioned plea to voters to vote for Joe Biden "like your lives depend on it."

"We have the chance to elect a president who can meet this moment, a leader who has the character and the experience to put an end to this chaos," Obama said, referring to what she described as Donald Trump's "wilful mismanagement" of the coronavirus crisis.

The US president was diagnosed with Covid-19 last Friday and several of his close aides, including his wife Melania, have also tested positive.

Trump however has continued to downplay the threat, projecting himself as a resilient patient who easily beat the virus, although his doctors insist he is not out of the woods yet.

"If you were a parent like me, you're feeling the consequences of this president's failure to take this pandemic seriously. From his constant downplaying of the importance of masks and social distancing," Obama continued.

"If we want to make a change, we have to make sure that every eligible voter is engaged. (...) We don't have the luxury to assume that things are going to turn out ok, or waste them on a protest candidate," she insisted, appealing to a wide range of voters, irrespective of partisan lines.

Her remarks took a personal turn.
As a black woman, like the majority of those in the country, having "done everything in my power to live a life of dignity and service and honesty, the knowledge that any of my fellow Americans is more afraid of me than the chaos that we are living through right now, well that hurts," said the 56-year-old wife of Barack Obama, the nation's first black president.

Obama criticised Trump and his Republican allies as unfairly "stoking fears" about African Americans and for "lying about how minorities will ruin US suburbs."

Future at stake
But she warned that such tactics have the potential to work, particularly because Americans lack the time and energy to fact-check everything being spread online or in US media.

"The one thing this president is really, really good at is using fear and confusion, spreading likes to win," she said.

Obama, one of the most popular and well-known Democrats has made no secret of her aversion to politics, shunning calls to contest Trump in the 2020 election race. In the past, her attacks against the US president have been veiled through statements such as "When they go low, we go high".

But the stakes this time are much higher, she warned.

"I want to ask every single American, no matter what party you regularly vote for, to please take a moment to pause, click off the news, think about how you felt over these last four years, how quickly things have turned, and then think about what these next four years can mean for our country's future."

Obama closed by asking Americans to "search your hearts and your conscience" and vote for Biden in November.

"I know Joe. He understands the struggle of everyday folks (...) and always willing to see the humanity in us all."