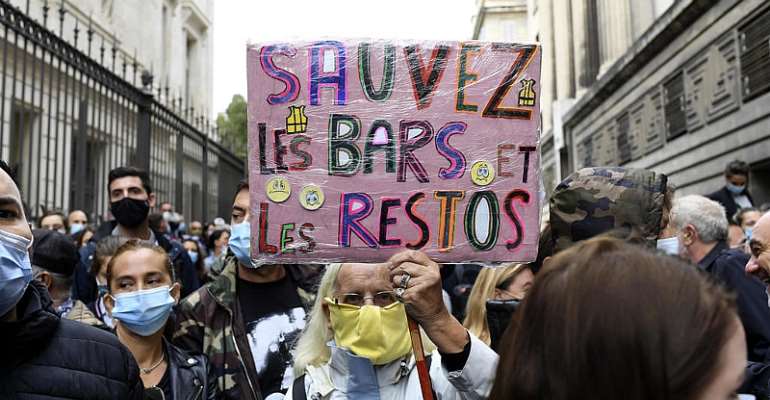 France's government announced relief measures on Tuesday for bars, cafés and restaurants forced to reduce hours or close due to new Covid-19 restrictions. Angry owners denounced measures they described as incoherent and ineffective.

On Monday evening, bars and cafés in Paris and 11 other French cities classified as “high risk” were obliged to close at 10pm due to new Covid-19 restrictions that were to last at least two weeks.

Restaurants and bars have been ordered to close entirely in “maximun risk” classified cities Marseille and Aix-en-Provence, where admissions to intensive care are at the highest levels in the country.

The new measures have provoked protests and a lawsuit from angry owners and officials in France's second-largest city since their announcement last week and come as a blow for a sector struggling after confinement in early spring and a reduced tourist season in the summer.

“We have the impression that we're being punished,” says Rémi Halegua, director of The Shamrock, an Irish pub in the touristic Old Port district of Marseille that closed on Monday.

Halegua says confinement and reduced hours already meant reduced business by 50 to 60 percent this year and wishes the government had considered other ways of ensuring health measures were being respected.

“They could have easily let the outdoor terraces of bars and restaurants stay open and carry out more police checks. People are pretty disciplined, and I see no problem at all on terraces.”

New measures to help owners
Marseille was not the only city where people were upset about the restrictions.

Disgruntled owners and customers left Paris bars at the request of police at 10pm on Monday, and restaurant and bar owners planned to demonstrate against the measures in the northern city of Lille on Tuesday evening.

Castex announced on Twitter the government would offer relief funds between 1,500 and 10,000 euros per month and full coverage of pay to temporarily laid-off staff to the end of the year.

Sense of incoherence
But underlying the new restrictions is a sense that the government has lost its way in dealing with the accelerating Covid epidemic.

“It's incoherent, because a third of clusters are in schools and universities, another third are in office buildings, but they decide to close restaurants and bars,” Halegua says. “It makes no sense to me.”

The closures also concern the cities of Marseille and Aix-en-Provence, but not the surrounding areas, despite being in close proximity.

“Ten minutes from my home is my workplace, which is closed, and 10 minutes in the other direction, I can go to a bar or restaruant,” Halegua explains. “It means our clients will go where it's open, and it's not far from the Old Port.”

Some Marseille cafés and bars have chosen to flout the rules and open regardless, despite risking 135-euro fines for defying the ban. But Halegua did not want to take that path.

“Everyone considered it, but we don't want problems with the law, and don't want customers to have problems because of us,” he says. “We prefer to close and to wait, and show that we respect the rules.”