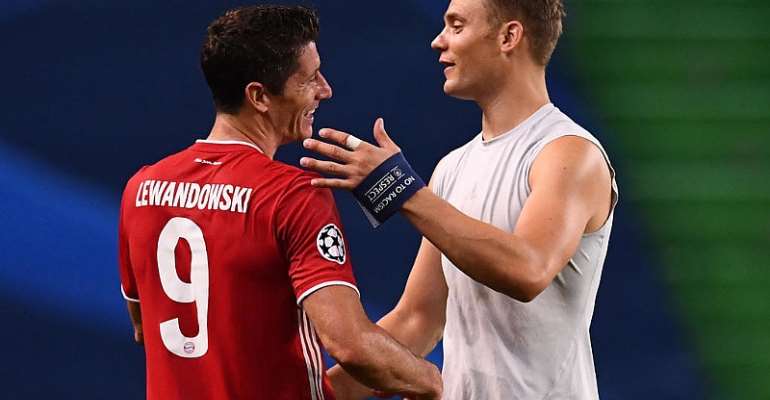 Bayern Munich's Champions League winning duo Robert Lewandowski and Manuel Neuer as well as Manchester City's Kevin De Bruyne have been named on the shortlist for Uefa's player of the year.

Neuer, the Bayern skipper and star attacker Lewandowski were key components of the Bayern squad that pulverized Barcelona 8-2 before sweeping past Lyon in the semi-final and outwitting Paris Saint-Germain in the final to claim the  trophy.

De Bruyne was midfield schemer-in-chief for Pep Guardiola during a season in which his expensively assembled side played second fiddle to Liverpool.

The panel of 55 European sportswriters and 80 coaches from last year's Champions and Europa League sides nominated PSG's Neymar and Kylian Mbappé in the final three for striker of the year - a category also including Lewandowski.

In the running for the women's player of the year, the France international Wendie Renard will vye with Manchester City's England star Lucy Bronze and Chelsea's Denmark international Pernille Harder.

German winner
The new prize - male coach of the year - will go to a German: Hansi Flick, Jurgen Klopp or Julian Nagelsmann.

Even though Klopp's Liverpool dominated the English Premier League season to lift their first top flight title in 30 years, Flick's achievements with Bayern have been mesmerising.

Since being installed as interim manager after the departure of Niko Kovac in November 2019, Flick has overseen a Bayern resurgence earning him a coaching deal until 2023 and a clean sweep of domestic and European crowns.

His side took the Bundesliga after the lockdown due to the coronavirus pandemic. They also neutralised Bayer Leverkusen to lift the DFB-Pokal.

The Champions League victory was the second treble in the club's history.

After his team started the new Bundesliga season with an 8-0 annihilation of Schalke, Bayern can add the European Super Cup to the cabinet on Thursday when they play the Europa League winners Sevilla in Budapest.

The best managers of women's teams will be Barcelona's Lluis Cortés, Stephan Lerch of Wolfsburg or Lyon's Jean-Luc Vasseur.

Uefa said the prizes be awarded on 1 October during the draw for the group stages of the 2020/21 Champions League.