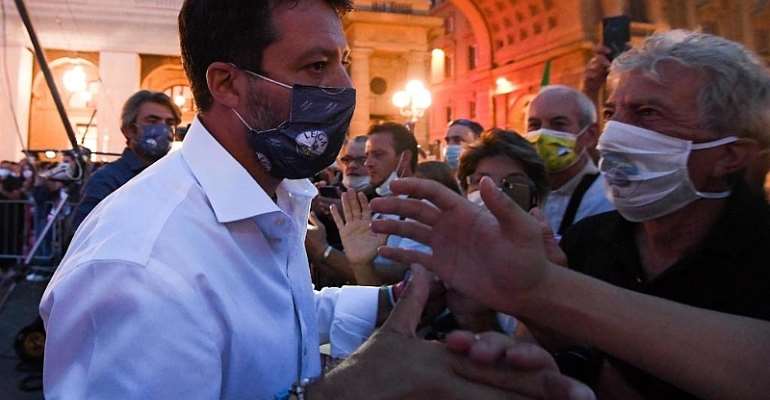 Italians headed to the polls on Sunday and Monday to vote for the presidency of seven of the country's 20 regions. They were also choosing mayors in almost 1,000 towns. In addition, Italians would be voting in a referendum on changes to the constitution that, if approved, will reduce the number of parliamentarians from 945 to 600.

The elections are being seen as a key test of public support for the coalition government made up of the anti-establishment 5-Star Movement and the centre left Democratic Party after the country was ravaged by the coronavirus pandemic.

Italy was the first country in Europe to be hit hard by the Covid-19 outbreak which killed 36,000 people in the country this year.

The majority of Italians have been pleased with how the Prime Minister Giuseppe Conte handled the pandemic during the year, with his harsh lockdown decisions and with the gradual re-opening of businesses.

With many new rules, schools have been the most recent establishments to be allowed to re-open their doors now in September, And this Sunday, football games from the Serie A were allowing a maximum of 1,000 spectators back into stadiums to watch games live, for the first time since the stop to live audiences.

The situation in Italy is significantly better than in other European countries like France, Spain and Britain. While the cases continue to rise slowly but steadily in Italy as well, the daily numbers have not exceeded 2,000.

With these elections, no one is expecting there could be a government collapse in the country anytime soon.

Nonetheless the elections are being watched closely because the rightist opposition, led by Matteo Salvini's League party, stands good chances of winning 4 of the regions and could capture Tuscany, a central region which has traditionally being a stronghold of the Left.

Voting appeared to go smoothly after polls opened in the early morning, despite the social distancing rules and hygiene measures being enforced at polling stations due to coronavirus.

Everybody wore a mask and was being asked to wait for their turn and to use hand sanitizer before casting their ballot. Prime Minister Giuseppe Conte arrived Sunday morning wearing a protective mask to cast his vote in Rome.

“Each election is the expression of a democratic participation. There is always the hope for all type of election, for all kinds of referendum, abrogative or constitutional, for a participation of the citizenship,” he said.

The referendum to reduce the size of the Italian parliament is the brainchild of the Five Star Movement and Democratic Party coalition government. The government claims it is pushing for the reform in order to simplify the legislative process and reduce the government's operating costs

. The opposition argue the reform would reduce the quality of representative democracy in Italy. But with polls showing 70% of Italians support the constitutional reform, it is likely to be approved

The 1992 constitution is a tool for stealing, rigging and pl...
45 minutes ago