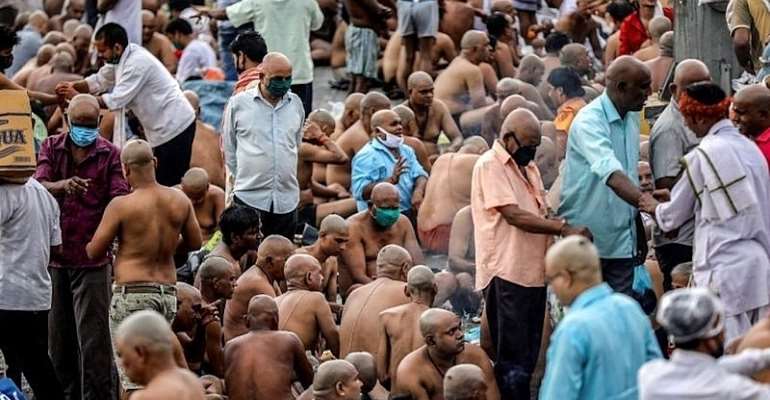 India crashed over 5 million mark in COVID-19 cases last week and already by this weekend had risen to 5.4 million cases as the country continues to battle the spread of the disease.

The last 1 million came in a world-record time of 11 days as infections continued to rise at an alarming rate in the nation with the worst-ever recorded case rate.

Virus surging ahead
In comparison, the US took 17 days to reach 5 million cases from 4 million cases. Officials in the health ministry pointed out that India took the longest time -168 days to add its first 1 million cases in the face of a stringent lockdown. Since then, it has been the quickest among the three most affected countries to add every new 1 million cases.

The 5 million grim milestone was reached on Tuesday, when over 90,000 cases were reported. Also, 1,284 new deaths were reported, taking the nationwide death toll to 82,091.

“The cases are steadily rising every day. Almost all of the country's hot spot regions are still seeing a rising curve. In terms of deaths, though, India has fared much better,” K. Srinath Reddy, president of the Public Health Foundation of India told RFI.

India now accounts for over 12% of active cases globally and about 8% of all Covid-19 deaths since the outbreak originated in China nine months ago. The country has been recording more than 90,000 new cases every day for the past week.

The western state of Maharashtra with more than one million cases remains the worst affected state in India, followed by Andhra Pradesh, Tamil Nadu, Karnataka and Uttar Pradesh. These states account for more than 60 percent of coronavirus cases in the country.

With reports of shortages of intensive care beds and oxygen supplies, the health ministry stepped in to allay doubts saying there was 'no shortage” of medical oxygen in the vital treatment of patients at the national level.

“The country's current daily capacity of oxygen production as on date is slightly more than 6,900 metric tons. We have ensured a proper inventory management at hospital-level and advance planning for timely replenishment so that there is no stock out,” said health secretary Rajesh Bhushan.

India's health infrastructure has been stretched to handle the pandemic especially in the rural hinterland with understaffed public hospitals, chronic shortages of hospital beds and low intensive-care capacity and poorly trained staff.

Poor health infrastructure
India has 1.7 nurses per 1,000 people, 43% less than the World Health Organization recommends, and a dearth of doctors as well.

The steep rise in infections in recent weeks comes as the country eases lockdown restrictions that have devastated the economy. While schools, colleges and cinema halls remain shut, most businesses have reopened and many cities opening up restaurants and hotels.

“The Indian government, much like its American and Brazilian counterparts, did not base its decisions on the soundest scientific understandings of the coronavirus,” said T. Jacob John, one of India's top virologists.

“Now, the epidemic is rampant and likely to remain so into early 2021.”

India's rising pandemic curve comes in the backdrop of the results of India's first nationwide serological survey that suggests that more than six million people were infected with the coronavirus as early as May.

The survey, conducted by the Indian Council of Medical Research enrolled 28,000 individuals across 70 districts in 21 of India's 29 states. The study was conducted from May 11 to June 4. The number of infections is an estimate, extrapolating the results of the study to encompass the entire population.

The findings are instructive as it confirms suspicions that infections are being vastly under-counted, especially in places where testing is inadequate.

It’s better to be safe than sorry, get vaccinated – Akufo-Ad...
54 minutes ago