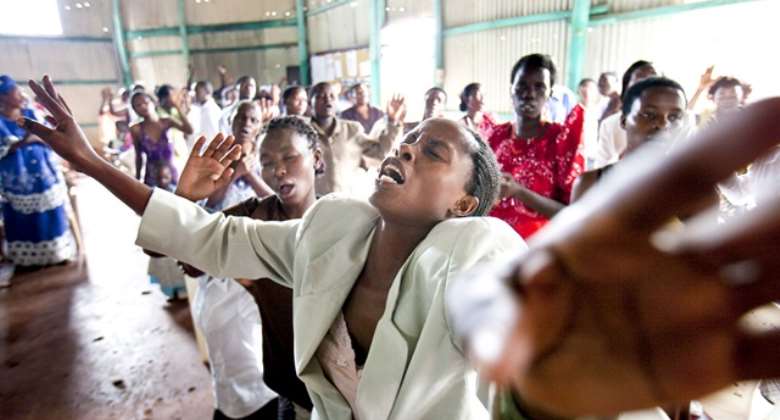 Psychosis is a condition that affects the way our brains process information. In this condition, one might see, hear or believe in things that are not real.

If you put the definition this way, then it follows logically that all religious people are psychotic in some respects. This is because they induce a condition based on shared illusion. In this condition, they have information from specific books or platforms which affects the way their brains work: They believe in things that are not real like witchcraft, demons, devils, miracles, juju money, rituals, prayers and such non-science/nonsense. These people also see things that are not real, like ghosts or demons and so on. These things are often seen in their dreams and are not supported by any reality whatsoever; however, it does not make any difference whether the things they see are in their dreams or not. Their dream state is reality enough for them. Because based on their dreams, they can accuse others of being witches or demons or devils and harm them. They also hear voices often urging them to act in a certain way.

They are also led by pastors or prophets or mallams who might be equally deluded or simply naive enough to believe in themselves as possessing spiritual powers to alter the destiny of others. Meanwhile, they have nothing and can affect nothing. Sadly, they have a basket of tricks up their sleeves to convince the gullible people that God has sent them to take their money. Salifu Amankwah, upon hearing the shooting death of the wife of a so-called spiritual son, declared unashamedly that he prophesied her death several times and advised the couple several times of the fate about to befall them. Yet he could not save them. After making these vainglorious pronouncements, he used the same platform to urge everyone attacked by witchcraft to come and see him to be delivered. These people are not smart enough to ask themselves why they could not save their spiritual sons and daughters.

There was another so-called prophet attributing the pastor’s murder to occultism while condemning those criticizing the pastor for his action. In his vainglory and self-aggrandizement, he could not decipher his own hypocrisy. Whenever these so-called men of God make their utterances, it is as if the spirit makes them too stupid to see the internal contradictions in their own declarations.

The joke is upon all these Ghanaians who have chosen to believe in these mountebanks and have as a result gone bonkers. How cool is it for all these deviants and academic failures with ambition without prospects to go through a few weeks of Bible school and then assert the right that God speaks through them and has commanded them to collect money in his behalf? Even the best of them are still lying to the people, spawning psychosis in themselves and in the population, They know for a fact that no God has ever spoken to them. They know that their prophecies are trickery and showmanship and lies. They know that they are selling excrement to the people as healing concoctions. And they also know that if they accuse people of witchcraft, they are simply lying to break up families and to empower and enrich themselves. They know for a fact that they daily rise to concoct new lies to defraud the population. And yet they have continued in their wickedness in order to have the good life while impoverishing the many. From the beginning of time, there has been nothing like a true prophet or a true religion anywhere because these notions are terms in contradiction as far as religion is complete superstition and therefore palpable lies.

And the very few among these pastors and prophets that cannot handle the falsehood, like the pastor in Orlando, eventually break down and commit heinous crimes against themselves or others. While researching for this paper, I realized to my shock that these prophets/pastors and serial killers compare favorably in terms of the frequency of people they murder or maim or hurt. They are also freely committing adultery against their followers and cheating them of their rightful inheritance.

Indeed, very few of us have any recollection of any good pastor or prophet anywhere. And the scandals we daily read support the notion that they are all evil. And so what do we mean by fake pastor or fake prophet? Insofar as everybody that claims to have heard the voice of God is either sick or lying; insofar as there cannot be any spiritual healing or demons or witches or heaven or hell or any supernatural power on earth, all those invoking these so-called powers are liars and therefore fake. And they are destroying the whole country by spawning psychosis in the people…convincing people to believe in things that are not real.

Some years ago, the psychiatric association of Ghana came out to declare that a substantial number of Ghanaians suffer from mental diseases. What they failed to acknowledge is the underlying causes of this mental disease that is so widespread among the people. The psychology association of Ghana also came out recently to state that religion underscores a lot of depression in the population. But that report was poopooed by many and never taken up for debate.

What people don’t get is that 95% of the Ghanaian population are religious in one way or the other; and actually believe in witches and spirits and demons. On account of their religion, they have acted out their faiths and beliefs in all kinds of ways, catching old people, step daughters and maidservants and lynching them or inflicting substantial harm on them; neglecting their parents and paying huge sums of tithes to the churches; spending hours upon hours in unproductive activities, praying loudly and speaking in tongues in the mosques and churches; purchasing oils and concoctions from these pastors ostensibly to facilitate their trips abroad; or just finding some people to kill for juju money and so on and so forth.

So all the symptoms of psychosis are present in our religious fervor notwithstanding where we are or the level of our education. A Ghanaian might free himself of the palpable lies of these so-called men of God and still maintain a residual faith in the Bible; in God, or in the spirits, thereby rendering himself still psychotic and gullible or vulnerable. We don’t yet have any Ghanaians that are atheists, those that have straddled the last bastion of free thinking and completely jettisoned superstition and are living in total reality. And that is very troubling.

There a few that may now be moving towards religious criticism and possibly free thinking, with the advent of the cogent teachings of Avram Ben Moshe and his acolytes. Still, there is no evidence to conclude that the typical Ghanaian is moving away from his impregnable religious grounding.

And as long as a smidgen of religious thought remains in the psyche of the people, they are victims of psychosis and will take their fantasies as their reality.

More trouble for Weija residents as more volumes yet to be s...
44 minutes ago