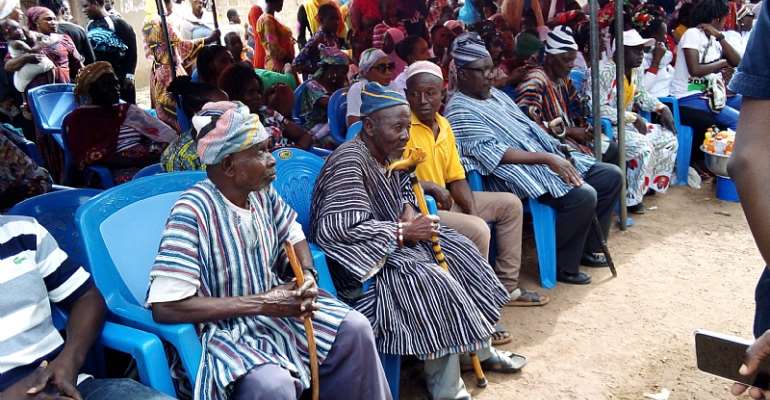 The Sindaa Youth of the National Democratic Congress has challenged the Chief Representative of President Akuffo-Addo in the Sawla-Tuna-Kalba District, Mr.Lawal Tamimu to a debate on development projects in the district.

According to the youth, the so-called infrastructure tracker presented by the Vice President, Dr. Mahamudu Bawumiah is either full of ghost projects or stolen projects of former President John Dramani Mahama.

In an address at the inaugural ceremony of the 'Sindaa Youth for the NDC', the president of the group, Kipo Saaka contested claims made in the tracker about infrastructure projects in the district under the current administration.

He disclosed that it had to take the smart borrowing under President John Evans Atta Mills of blessed memory and John Dramani Mahama as Vice President to birth the 147-kilometre (91 miles) Sawla-Damongo-Fulfulso road with other massive auxiliary facilities.

Aside from the road project, he counted massive infrastructural projects such as the E/A Primary School and J.H.S at Sindaa, Sawla S.H.S, Sawla District Hospital, Sawla Community Centre, Sawla Market, rural electrification in a good number of communities, CHPS compounds among others as the sole achievement of the erstwhile Mills-Mahama administration which cannot be plagiarised.

He reiterated the fact that the visionary leadership of Ex-President Mahama saw the construction and upgrading of the University of Ghana Medical Center, Bank of Ghana Hospital, Ridge Hospital, the Tamale Teaching Hospital and the Ebola Treatment Center which is now accommodating COVID-19 patients.

The president of the youth group challenged Mr.Lawal,the District Chief Executive to mention a single infrastructure project executed by the current government in the health sector in the constituency, adding that,"we are ready to debate the DCE any day,anytime on development projects in the district".

She said for any good policy to yield development, it should produce both quantitative and qualitative improvement in the lives of the people, but the free SHS with its attendant double-track system where student-teacher contact hours have been drastically reduced with overcrowded dormitories can never guarantee quality.

She observed that it was debasing to watch disheartening videos of so-called Akuffo-Addo graduates who were given past questions to read, pass, and shame perceived distracted, disgracing the president at last through demonstrations borne out of frustration because they couldn't answer the questions in the final exams.

On the economy, the young political activist said Dr.Bawumiah and his boss, the president have drained the confess of Ghana with reckless borrowing and mismanagement of the economy and don't deserve a single day at the seat of government beyond January 7, 2021.

The Savannah Regional Chairman of the NDC, Alhaji Imoro Seidu said the NPP government has already lost power, encouraging the youth to work more hard towards returning Ex-President John Mahama back on power for a prosperous Ghana.

According to him, farming which is the mainstay of the people of Sawla-Tuna-Kalba constituency has become very unattractive under the current administration, pledging a restoration of the situation should John Mahama win the 2020 polls.

The Savannah Regional Secretary of the party, Mr. Sualisu Biuwurbi said the future of the youth of Sawla-Tuna-Kalba constituency is very bright in politics and under the NDC.

He applauded the courage of the youth in standing up for the truth, adding that, His Excellency John Dramani Mahama is returning to government in 2021 with lots of hope and job opportunities for the youth.

The Member of Parliament for the Sawla-Tuna-Kalba constituency,hon. Andrew Dari Chewitey disclosed that the youth group has already prepared the grounds for the much awaited victory of the NDC come December 2020.

He said the almighty God has already made the way for the NDC in the forthcoming polls, pledging his full support for the youth group.

Among other things,he said the NDC has embarked on massive visible infrastructure projects in the constituency,unlike others who are touting some nonexisting projects in a so called tracker that cannot be factually tracked.

Also present was the MP for Salaga North, Hon. Alhassan Mumuni,former appointees and Members of Parliament, regional and constituency executives of the party, cadres, chiefs, sympathisers and supporters of the party and the media.