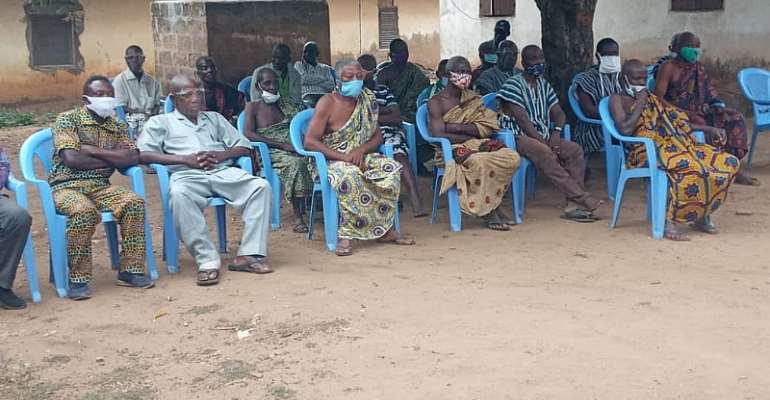 The National Commission for Civic Education (NCCE) in the Adaklu District of the Volta Region, has engaged the people of the Adaklu Abuadi community on what Social Auditing really seeks to address at a forum.

The People were made to understand that the aim of Social Auditing is to promote community ownership of developmental projects, policies, create awareness on the links between the communities and the operations of the local government, and how to empower the citizens to demand accountability from all duty bearers.

The District Director, Mr. Francis Asamani, admonished the community members to take all developmental projects as their newborn babies and look for avenues to take ownership and support the projects; instead of indulging in acts which would retard the progress and continuity of any project being undertaken within the community, that is either from the central government or the community’s self-help initiated projects.

Mr. Asamani encouraged the community members to take up and own the developmental projects and culture of waiting on the District Assembly for all community development projects that should be a matter of the past.

Mr. Asamani urged the community members to report all acts of corruption of public officials to the appropriate quarters.

He said, our communities cannot develop or progress smoothly if we continue to shield and condone acts of wrongdoings of nation wreckers.

The Deputy Volta Regional Director of the NCCE in the person of, Mr. Oral Robert Amenyo, in his address, sensitised the gathering on Lobbying and Advocacy.

He added that when lobbying is done well, support towards community developmental projects can come from some Individuals, the District Assemblies, other Institutions, or NGOs.

Mr. Amenyo urged the community members to always give their lot by owning and protecting whatever projects and programmes that are being undertaken at their backyards either by the central government, NGOs, some key individual stakeholders or by the community itself.

He inaugurated and encourage the Social Auditing Committee Members to be up and doing in order to justify the confidence reposed in them by the entire community.

The Adaklu Abuadi Togbewo, Mamawo, and the community at large were full of praise for the honour done the Abuadi community by the NCCE and the European Union (EU) for their selection for the social auditing engagement.