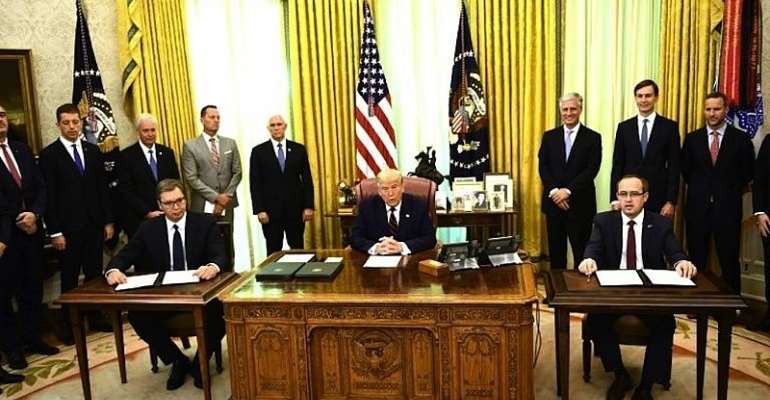 Former rival states Kosovo and Serbia have reached a deal to normalise economic relations in a US-brokered deal that the administration of President Donald Trump has touted as a major diplomatic success.

The two sides have committed to a raft of measures which will improve transport infrastructure and border crossings, cut trade tariffs and share energy and water resources. They have also promised to implement earlier agreements on opening highway and rail links.

Serbia and Kosovo have also agreed to improve their relations with Israel. Serbia will move its embassy from Tel Aviv to Jerusalem while Kosovo, a majority-Muslim country, will formally recognise the Jewish state.

In turn, Kosovo, which declared independence from Serbia in 2008, will gain formal recognition from Israel.

"By focusing on job creation and economic growth, the two countries were able to reach a real breakthrough on economic cooperation across a broad range of issues."

Trump praised his special emissary Richard Grenell for bringing the two sides together, two decades after they fought a war that left 13,000 dead.

"It took decades because you didn't have anybody trying to get it done," Trump said of the agreement.

"There was a lot of fighting and now there's a lot of love," he said. "Economics can bring people together."

A deal with the US, not with neighbours

Each of the two nations continues to refuse to recognise the other. The two sides have thus signed parallel statements of intent rather than a formal bilateral agreement.

Vucic stressed that the Serbians had struck a bilateral agreement "with the US," so that no recognition was given to "third party" Kosovo.

Hoti said the deal was "a big step" towards the two sides granting each other formal diplomatic recognition.

Serbia has refused to recognise its former territory since Kosovo declared independence.

Although many countries recognise both nations, Serbian allies China and Russia have withheld their endorsement of Kosovo as an independent state, preventing it from joining the United Nations.

The latest agreements include significant help in economic and infrastructure projects from the US Export Import Bank and the International Development Finance Corporation.