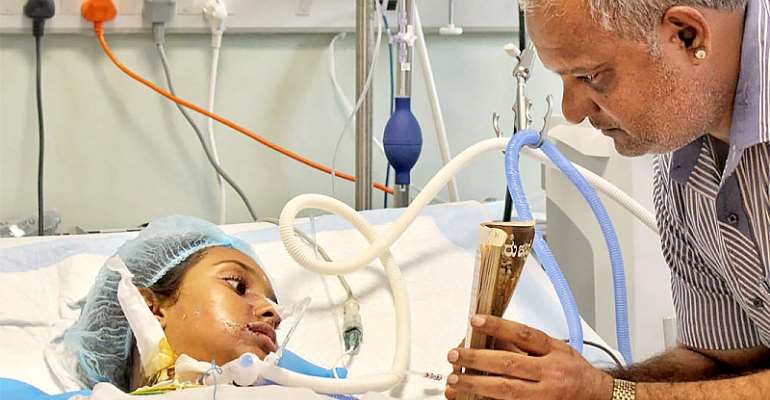 In a show of tremendous willpower and determination, 16-year-old Sushma, hailing from Bengaluru overcame a rare life-threatening auto-immune disease and secured 76% marks and a distinction to clear her SSLC exam.

Sushma was suffering from Juvenile dermatomyositis for the past 2 years, a rare autoimmune disorder, where the immune system attacks blood vessels throughout the body causing muscle inflammation. The disease had severely affected her breathing muscles (muscles of the chest) and kidneys. She urgently needed dialysis, blood transfusions, and ICU supports along with steroid medications without which she would not have survived for long. However, due to the economic condition of the family, the child was unable to receive the vital treatment which left her parents helpless and heartbroken. Efforts undertaken by the team of expert doctors at Aster CMI Hospital along with collaboration with a crowd-funding platform ensured the child’s survival and enabled her to appear for her exams.

An ambitious young girl, Sushma always dreamt of becoming a lecturer one day. She was so driven by her aim that she never missed attending her school even when she was sick, but her aspirations were brought to a sudden halt when she severely fell ill two years back.

"My daughter suddenly complained of high fever and swelling on her face. A day before her sudden illness, she danced and sang on an occasion. So, we thought the activities strained her. But after a couple of days, her hands and legs were completely swollen, and rashes were beginning to show up. On the way to the hospital, she fell unconscious. We quickly consulted the doctor who told me that she is very critical and fighting for her life with a rare disease that is affecting major parts of her body. We were shocked and did not know what to do. But all we understood was that there was very little time left to save her, so we immediately admitted her in ICU." said Sujatha, Sushma's mother.

At the time of her admission at Aster CMI Hospital, 14-year-old Sushma presented several symptoms like fever, low platelet, rash over eyes, face and severe muscle pain and weakness, and also had renal failure. On further evaluation, it was found that the child had rashes over fingers (Gottron papules), a peculiar rash over eyes (heliotrope rash), hoarse voice and severe limb and respiratory muscle weakness, all of which indicated that the child was suffering from Juvenile dermatomyositis. The disease had led to respiratory failure in the child and she was put on ventilator support.

Given the severity of her illness, Sushma required intensive care in the form of regular blood transfusions, platelet transfusions, broad-spectrum anti-microbial, dialysis support, and immunomodulation (immunoglobulin injections, steroids) along with a 6-week long stay at the hospital. The cost of her treatment was estimated to be around 12-14 lakhs. But owing to the poor economic condition of the family, the child’s parents were unable to afford the treatment. Even after leaving no stone unturned, the child’s father who is the sole breadwinner for the family and is a priest at the temple was able to collect a sum of Rs. 7 lakh and were not able to meet the remaining amount. This is when Aster CMI hospital in collaboration with a crowd-funding platform came forward to raise the additional funds for Sushma’s treatment and played a vital role in saving her life.

Speaking about the cause of the disease and the complexity of the case, Dr Sagar Bhattad, Consultant, Pediatric Immunology and Rheumatology, Aster CMI Hospital said - “Dermatomyositis is a rare auto-immune disease where the immune system attacks organs and tissues of the self. There is no particular reason or cause of this disease. Unlike rheumatoid arthritis, where there is an attack on the joints, this disease primarily impacts the skin and muscle of the patients. Though it is more common in adults, we are now witnessing this in children as well. In Sushma’s case, she had severe muscle weakness and was unable to walk and breathe. By the time she was brought to our hospital, she had already developed respiratory failure and was put on ventilator support. Due to prolonged ventilation for more than a month, we had to conduct a tracheostomy enabling her to breathe. Later her kidneys had also shut down and she was put on dialysis support for a few days. Her condition was turning critical every day and during the initial few weeks of her treatment, we had thought, she may not make it. But our team fought on, as did Sushma and her family!”

“With the support from the funds raised through the crowd-funding platform, the family was able to continue her treatment and by the 3rd week, Sushma started showing recovery and by 6 months she started doing all her activities on her own. However, she still faced a challenge to hold a pencil or a pen for several months due to the severe muscle weakness in her hands. With the help of aggressive physiotherapy, she regained regular movements of the hand and could finally start writing! Today, as she has cleared her exam with an outstanding result, it is an extremely inspiring moment for all of us to witness, how her sheer determination and will-power enabled her to continue pursuing her ambition. We are glad that with our conscious effort we were able to give her a second chance at life.” - added Dr. Bhattad.

Thanking the doctors for providing the life-saving treatment to his daughter, Mr. Srinivas, Sushma’s father said - “Sushma used to read while I used to hold her favorite books during her treatment at the hospital. Her books were the only source of distraction for her that made her forget her pain. Even during times of extreme pain and agony, she did not let go of her ambition and her willingness to learn. I will always be in debt to the doctors at Aster CMI hospital for saving my child’s life and enabling her to continue chasing her dreams.”

Speaking about her success Sushma said, “I have always dreamt of becoming a lecturer one day and I am grateful to Aster CMI doctors who saved my life and have ensured that one day I am able to turn my dream into a reality. It is due to the constant support from my parents and doctors that motivated me to prepare for my exams and resume normal life.”

Awutu Senya East: One injured as NPP supporters of outgoing ...
56 minutes ago