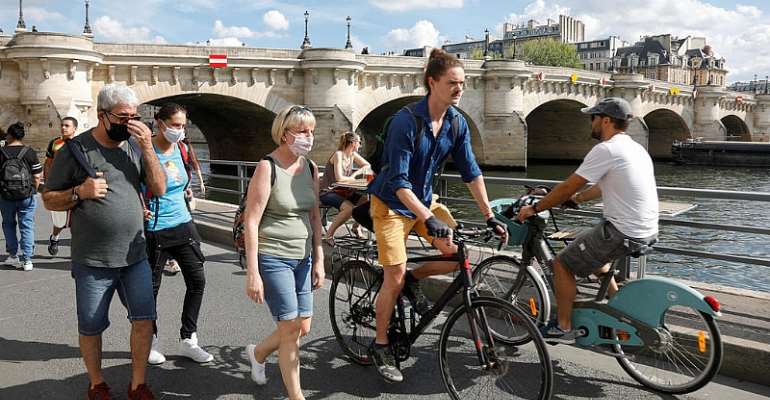 France has reported 493 new Covid-19 infections in the latest 24-hour period, sharply down from highs of over 3,000 on the two previous days. But the post-weekend dip is no sign for optimism, according to coronavirus hospital admissions numbers, which rose for a third day in a row.

New Covid-19 case numbers published on Mondays have consistently been lower than weekend tallies, as fewer coronavirus tests are conducted on Sundays. Saturday 15 August was also a public holiday, which may have contributed to the lower figures.

Since the beginning of August, the infection rate has risen at an average of 1,830 new cases per day – two-and-a-half times higher than July, and also higher than the 1,678 new cases in March at the height of France's epidemic.

French hospitals recorded 234 new Covid-19 admissions in the last 24-hour period to Monday, up from 173 on Friday.

Nearly 5,000 people are currently hospitalised, with younger people worse off than during lockdown.

"The number of people hospitalised for Covid has been on the rise over the last three weeks, especially among those under 40 years of age," the health ministry pointed out.

Nine people from the same nursing home, in Pulnoy, eastern France, died from the virus over the past week, as care homes once again begin to shut their doors amid the recent spike.

Pulnoy Mayor Marc Ogiez blamed the outbreak on waning vigilance by families amid the vacation season, and a sense among many in France this summer that the virus crisis was over.

The regional health agency issued an online appeal Monday for reinforced medical staff for hospitals and nursing homes in the Grand-Est region, which was the first in France to be badly hit by the virus in March.

The government on Tuesday proposed that masks be worn in shared indoor workspaces while Paris and Marseille, France's two biggest cities, again declared "red zones" of infection and have expanded areas where mask-wearing is mandatory.