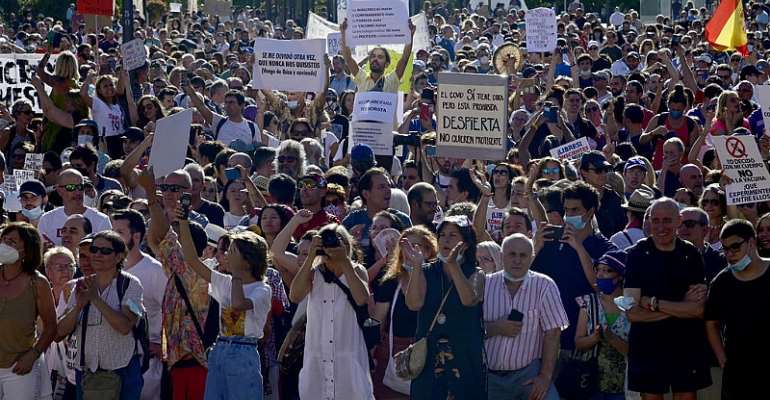 Hundreds of people gathered in Madrid on Sunday to demonstrates against the obligatory use of facemasks and other anti-coronavirus measures put in place by the Spanish government to stop the spread of Covid-19.

Protesters shouting “freedom”, clapping and cheering came together under the large red and yellow Spanish flag that flutters above Plaza Colon in central Madrid, complaining about government repression of the people.

Anti-maskers held up placards reading, “The virus doesn't exist” and “We're not afraid”, in response to calls on social media to stand up against the measures put in place against the pandemic, AFP news agency reported.

The protest drew a wide spectrum of people including anti-vaxxers, libertarians and conspiracy theorists, AFP said.

Many of the anti-mask protesters did not wear the mandatory facemask, even though under Spanish law they are now obligatory in public. Some of the anti-maskers did ironically wear masks, despite the subject of their protests.

Surge in Covid-19 cases
The country has witnessed a spike in coronavirus infections since it ended its three-month lockdown measures on 21 June.

Mask-wearing in Spain was originally mandated in early May as necessary for those travelling on public transport, and was later expanded.

Almost 29,000 people have been killed by Covid-19, the eighth highest death toll in the world, according to statistics from the John Hopkins University.

Authorities in Madrid announced new measures against the virus two days to halt the spread of the virus, closing discos and slapping a ban on smoking in public areas unless social distancing is possible.

Your MMDCE list plagued by inequalities entrenched in the du...
35 minutes ago