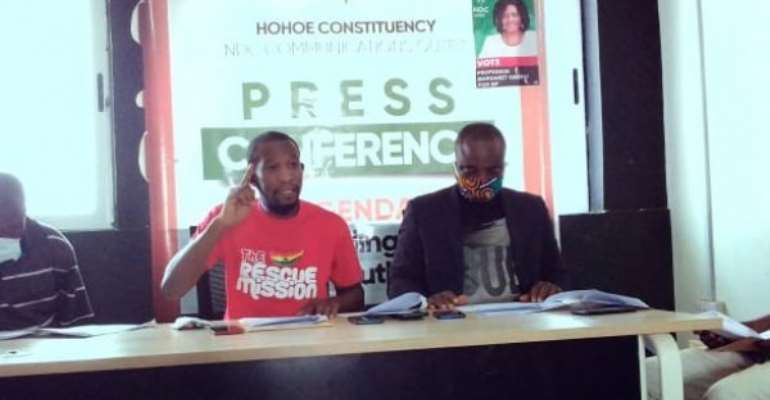 Mr. Prosper Kumi, Deputy Communication Officer of the Hohoe Constituency branch of the National Democratic Congress (NDC), has said the party's parliamentary candidate, Professor Margaret Kweku, has made “very important” contributions to the development of the area and was the right person to lead the Constituency.

He said the NDC candidate, who was a health officer, occupied many public offices beyond politics and had led the charge to ensure human and physical developments in the area.

“We believe a true political leader must be assessed beyond their political endeavours.”

Mr. Kumi disclosed these in the Party's “revealing the hidden truth series” media engagement in Hohoe.

He said that Professor Kweku's tenure as the Hohoe District Director of Health Services, which comprised the now Afadzato District had among others chalked many successes due to her diligence and professional works.

He said the current status of the Logba Vuinta, Goviefe, Wli Todzi, Kpeve and Santrokofi Health Centres reflected the development-oriented leadership skills of the Parliamentary Candidate.

“The people of Vudzekpe, Ziope and Tanyigbe are some community members, who would continue to be grateful to Professor Kweku for helping establish health centres within her first year as Director of Health.”

He said the Professor in Epidemiology had led several policy formulation and implementation including investigation and research in the “Cutaneous Leishmaniasis,” which the University of Health and Allied Sciences (UHAS) had identified and mainstreamed her findings.

Mr. Kumi said the PC utilised her intellectual ability to solicit for funds from World Health Organisation to carry out health screenings among vulnerable groups including children and women on disease conditions such as anaemia with most people being treated and managed.

The Officer said she designed and piloted a study in the Volta and Eastern regions prior to the national mass distribution of treated mosquito nets either through antenatal or private sector to determine appropriate outlets to use for the distribution and again the study into efficacy of chloroquine drugs.

“Professor Kweku carried out a major projects in Hohoe known as International Preventive Treatment of Malaria in children less than five years, which is now known as Seasonal Malaria Chemo-prevention (SMC) to prevent malaria in the age groups and has become national and international policy and being implemented.”

He said Professor Kweku played a vital role in the establishment of the Hohoe Mutual Health Insurance Scheme by developing the project proposal, which was adopted for the policy formulation and implementation.

Mr. Kumi said the PC's role in the establishment and growth of the Public Health campus of UHAS in Hohoe included acquiring a 960-acre land for the permanent campus development and increasing student enrolment to more than 1,200 currently.

He assured constituents of former President John Mahama's commitment to health such as adequate provision for and timely employment of health workers including nurses in his second coming.