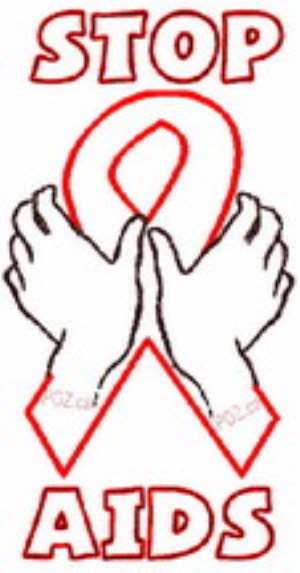 In Ghana an estimated 400,000 of the country's 20 million people are infected with HIV/AIDS. But, in a country where the majority of the people are classified as poor, getting the proper treatment to these people is a major problem.

This is the Fevers Unit of Ghana's premier hospital, Korle Bu Teaching Hospital in Accra, and a health care assistant is delivering materials to consulting rooms, to get the day's clinic for outpatients under way.

Seated in line along the corridors are mostly people infected with HIV/AIDS.

This patient, Abdullah, discovered four years ago he had HIV when he lost his wife to the disease. His son, now seven is also HIV positive, so they are both on anti-retroviral therapy, or ARV, the cost of which is about 90 percent subsidized by the government. But Abdullah says it is still not easy to afford the treatment.

"When you come [to the] clinic, [they do not only give you] anti-retroviral drugs, they will add some food supplements, so if you weigh at times the drugs that they add to the ARV is more even costly than the ARV," he explained. "Maybe you may be given two months drugs, which 100,000 [cedis - which equals $11], but the extra drugs that they will write for you will cost over 200 - 300 [thousand cedis, $22 to $33] ... you see like me, myself and my son, at times to buy drugs, I have to credit."

Like Abdullah, Dorcas, 39, has been out of work due to ill health. Her husband left when she tested positive for HIV/AIDs and her family also abandoned her. Dorcas says getting money for treatment is a big problem for her.

"Sometimes it is difficult for me to get the money to buy the medicine," she said. "I borrow money from a friend before I get the medicine. My eating too is the problem."

Dr. Herietta Arhin, who is training at the unit, says getting the money for treatments and tests is one of the major challenges for patients.

"Basic ones like knowing your hemoglobin level, your kidney function test, your liver function test, your CD-4 count, those ones are free, but there are still some other things that the patient needs to pay for, like the vitamins and the Septrine they take. They need to buy it on their own, certain labs like a chest X-ray being done, they need to go and pay for it," she said.

Dr. Arhin says even with the government subsidy and occasional private donations, not every patient eligible to receive anti-retroviral therapy is able to pay for a full treatment, and this presents a problem for the hospital.

"When you need to start drug (treatment) we need to be sure that you can continue taking it because we do not want there to be a break in the course of the treatment," she explained.

About 80,000 AIDS patients in Ghana need anti-retroviral therapy, but only a small fraction of them - about 5,000 - get all the treatments that health experts say is necessary to help infected people lead normal lives.

Professor Sakyi Awuku Amoa is the director general of Ghana's AIDS Commission, a government body that manages and coordinates the country's response to the disease. He says Ghana will soon embark on a plan that will enable it to treat many more AIDS patients.

"Because the cost is very high, because we need to train physicians before they administer the drug, because hospitals need to prepare properly it has not been possible to put all these 79,000 on the drug," he said. "So, this is where we have developed a plan to make sure that gradually those who need it can go on it. Our plan is that by December this year 16,000 people would have been put on the drug, by next year June 2007 about 30,000 people would have been put on the drug."

There are 27 centers across Ghana where people living with HIV/AIDS can access treatment services, and according Professor Amoa there is a program in place to expand access.

"By next year, 50 percent of our district assemblies (hospitals) would have also been prepared to make sure that service will be delivered at the local levels," he said. "So there is a consistent plan to make sure access becomes universal, that treatment can be received at any center where it is necessary, and as much as possible we [are] working towards that universal access for treatment, care and support."

Until that target of universal access is reached, HIV/AIDS sufferers in Ghana, in one patient's words, "can only hope that the world finds a cure sooner than later."

Mahama Saved Ghana’s Crushing Economy Within A Year After Ba...
1 hour ago

Postpone 2020 Elections To Next Year – Methodist Minister
2 hours ago