Kafaba Lynching: I Was Possessed – Woman 'Killer' Reveals In Court 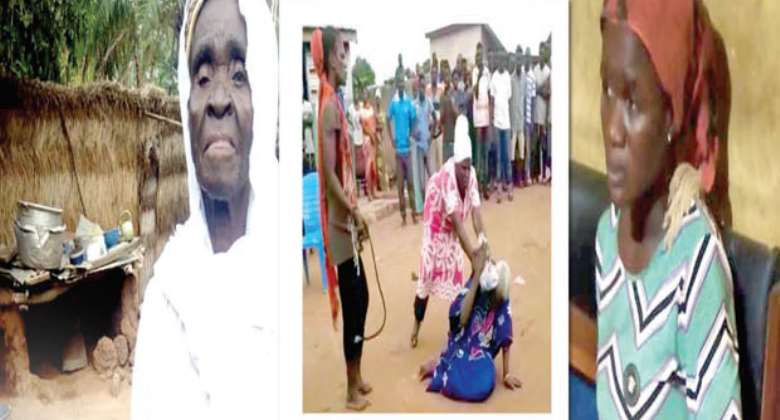 A key suspect in the lynching of Akua Denteh, a 90-year-old woman at Kafaba in the East Gonja Municipality of the Savannah Region, over allegation of witchcraft, has spoken for the first time since her arrest last Friday.

Latifa Bumaye, 33, claimed she was 'possessed' and did not realize she was participating in the lynching of Akua Denteh.

She claimed she went to wash her clothes at the river bank with her sister when the spirit entered her, adding “I saw the incident on television and I wondered if I was really the one who tortured her like that.”

Besides, she claimed that the woman who had passed on is her grandmother, a position rejected by the family of Akua Denteh.

Latifah believed to be an associate of the ringleader, Hajia Filipina, was picked up at Kejewu Bator, a fishing community under Abrumase Police Station within the Salaga Division in the East Gonja, whilst going to Yeji on Friday.

She is believed to be the woman in the video menacingly whipping the old lady with a long whip. Meanwhile, the chief suspect, Hajia Filipina, is yet to be apprehended.

According to sources, Latifa is expected to be sent to the Regional Police Command in Damongo to be processed for court on Monday.

The Chief of Kafaba, Seidu Yahaya, under whose jurisdiction the incident occurred, had also been granted police inquiry bail.

According to police sources, they heard about the hideout of the suspect and dispatched detectives to Kejewu Bator where she was picked up and escorted back to the Salaga Divisional Command.

DAILY GUIDE understands that she is being processed to be sent to the Regional Police Command in Damongo for further action.