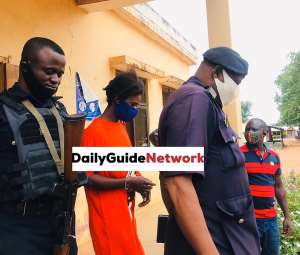 Latifah Bumaye, 25, a trader believed to be an associate of Hajia Filipina who allegedly lynched a 90-year-old woman, Madam Akua Denteh, at Kafaba in the East Gonja Municipality of the Savannah Region, has been arraigned before the Bole District Magistrate Court today presided over by Andrew Prince Cudjoe.

The accused person was provisionally charged with murder.

The case prosecutor, chief inspector Abdulai B. Awuni, pleaded with the court to remand the accused person for further investigation.

The judge granted the request of the police prosecutor and demanded the accused be remanded into police custody to reappear in court on August 20, 2020.

The charge was read and explained to the accused person but her plea was not taken.

The suspects – Haruna Aness, 34; Issaka Tanko, 35; Shaibu Murtala, 29; Sulemana Ali, 35; and Issaka Sachebu, 32, have been charged with conspiracy and murder.

The Chief of Kafaba, Seidu Yahaya, under whose jurisdiction the incident occurred, has also been granted police inquiry bail.

Madam Akua Denteh was lynched at Kafaba in the East Gonja Municipality in the Savannah Region.

The woman was openly beaten to death by Hajia Filipina,the soothsayer with support from a mob in the community.

The main suspect, Hajia Filipina, as at the time of filing this report was still on the run.