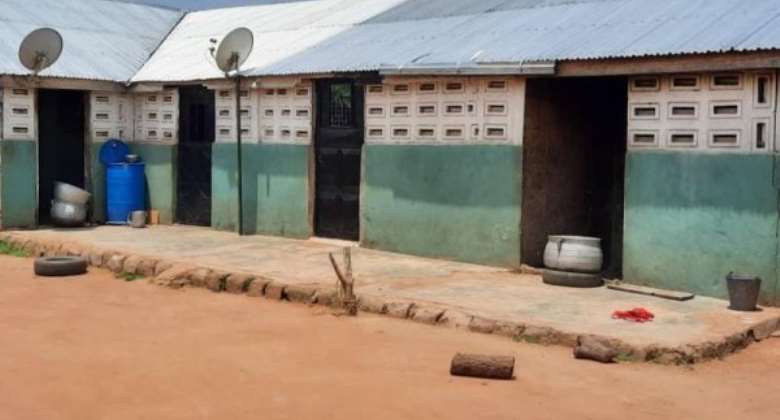 The last son of the 90 year-old woman who was beaten to death at Kafaba has shared her last unfulfilled wish saying "My mother's last wish was to see my children before she will pass away."

Mr Mahama Saaka, who is 36-years-old and teacher at Salaga T.I Ahmadiyya Senior High School, who recounted this, said he was yet to have a child and unfortunately his mother had to die this way without seeing his children.

He recounted this when the Ghana News Agency (GNA) visited the family of the murdered old woman at Salaga in the East Gonja Municipality of the Savannah Region to gauge their mood after the sad incident.

Madam Akua Mariama Denteh, 90 years-old, was on Thursday, July 23, beaten to death at Kafaba by some residents and a spiritualist, who accused her of witchcraft and behind certain strange happenings in the area including; limiting the progress of the town.

Madam Denteh had nine children, and three died leaving two males and four females, a number of them as teachers and 21 grandchildren.

The spiritualist was brought to the town by some youth of the area to fish out alleged witches in the area, working against the progress of the town.

The spiritualist mentioned Madam Denteh as a witch, which she denied but her denial was not accepted and was subjected to beatings.

The incident was captured on video, and had since gone viral on social media.

The deceased has since been buried.

So far, the Police arrested Yenufunu Yahaya Seidu (V), a Chief at Kafaba, who had been granted police enquiry bail, and six others in connection with the incident.

The incident has attracted condemnation from civil society organisations, politicians, gender and human rights activists across the country.

GNA gathered that, when Madam Denteh was beaten and succumbed to the torture, the spiritualist identified 17 other women in the area as being witches and some of them were also subjected to beatings whilst others, who were connected to powerful people in the area, were spared from beatings.

Mr Saaka said “It had been my greatest desire to fulfil my mother's wish but I'm shattered now, I don't know what to do.”

He told the GNA that “Since the incident happened and I took my Mum to the morgue, I have not been myself, I'm sick internally, I can't even cry. She wanted to see my children before she will pass. That is the promise she gave to me, but the unfortunate incident has crushed everything.”

He said “I don't believe that my own community; they will do this thing. I'm very, very surprised because I grew up there. We are very sad. We don't know what to do.”

He called for justice to be served “So that my Mum will be used as an example to protect all other elderly women.”

Mr Mahama Sallam, 60 year-old third child and surviving first son of the deceased, said what happened was unacceptable, attributing it to ignorance saying “We leave everything in the hands of God.”

GNA also visited the spot, where the old woman was beaten at Kafaba, and it was a compound of a house, whose owner had since fled the town.

The road from Salaga to Kafaba is in a deplorable state and it takes about an hour and a half to reach Kafaba from Salaga using a four-wheeled vehicle.

There is no Police Post at Kafaba, which presupposes that unless a good Samaritan in the town intervenes, any unlawful act could be meted out to any citizen in the area.

Yenufunu Yahaya Seidu (V), a Chief at Kafaba, who was arrested and granted bail in connection with the incident, told the GNA at Kafaba that some youth of the area informed him of their decision to invite the spiritualist to fish out witches in the area to ensure the progress of the town.

He said lawless acts in the area could be prevented, if there was a Police Station in the area and appealed for one in the area to ensure law and order.