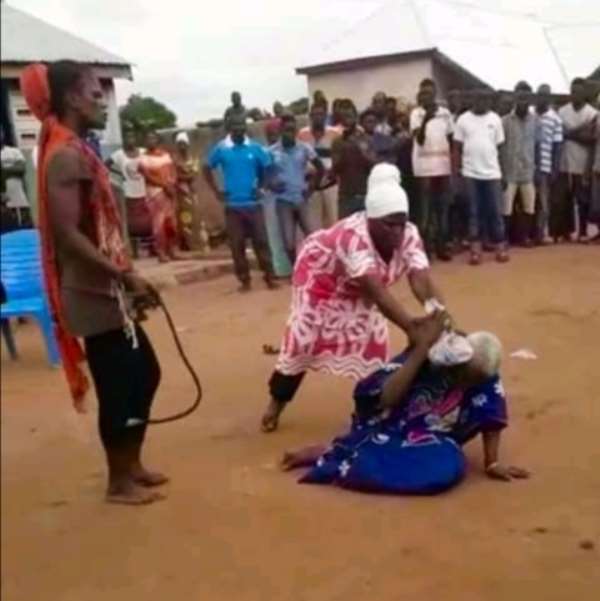 Five suspects have surrendered themselves to arrest in connection with the lynching of a 90-year-old woman who was accused of being a witch at Kafaba in the Savanna Region.

Class91.3FM’s Savanna regional correspondent, Rauf Zion, reported that the suspects are known members of a youth group of the governing New Patriotic Party (NPP) in Kafaba in the East Gonja Municipality.

The arrests were made by a special team of personnel from Accra and handed over to the Criminal Investigations Department (CID) of the Savanna Regional Police Command at Domongo.

The statements of the five suspects have been taken following their interrogation.

They are to be arraigned within the week.

Meanwhile, the chief of Kafaba, Kafabawura Yahaya Zakariah, has been granted bail after the arrest of the five suspects.

On Monday, 27 July 2020, President Nana Akufo-Addo, while touring the region, said the lynching has “disfigured the face of our nation.”

Mr Akufo-Addo said he hopes “the quick response of the police will lead to the rapid administration of justice in this unfortunate matter”.

In a statement, the Ghana Pentecostal and Charismatic Council added its “voice to those of other well-meaning Ghanaians in calling for serious investigations and arrest of all those involved in this heinous crime, which can best be described as very cruel and barbaric.”

The Council emphasised: “We must, at all cost, seek justice for this 90-year-old woman and all those who have suffered such atrocities in the past.”

According to the Council, “it is heart-breaking to note that in this modern-day and age, our society seems to be drifting into an era of lawlessness where some people can take the law into their own hands”.

“There is an urgent need to inject some discipline and sanity into our everyday behaviour as a society.

“We must intensify our education of the public on what their rights as citizens are and what they can do or not do so as to make the society a safe and secure place to live in”, it added.

The Council further indicated: “There is also the need to consider whether it is not time to close down “witch” camps which are predominantly found in the Northern Regions and find ways and means of reintegrating inmates of such camps, who are mostly elderly women and sometimes their children and grandchildren, into the society.

The GPCC added that the lessons of such gruesome murders must be used “to right the wrongs in our society. The elderly, weak and vulnerable must be targeted for the care and protection of our society.”