NDC’s Love For Voltarians: A Swindle? 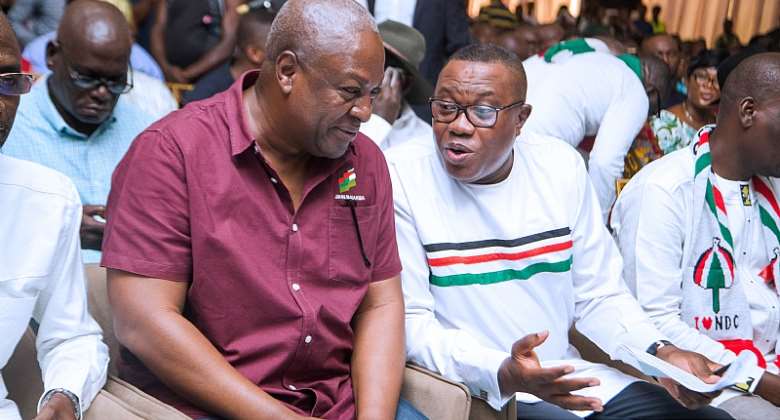 I have watched Hon. K.T. Hammond’s video for more than 50 times, with keen attention in order for me to identify the part of the video that says “VOLTARIANS/EWES IN THE VOLTA REGION ARE NOT GHANAIANS”. I still haven’t heard that in the said video. Am I watching a different video?

Growing up as a Voltarian, I was made to believe that when you vote for party “A”, you will be driven out of Ghana. Out of fear, we became loyal to party “B” and almost always voted for them. That was a huge political scam!

Tribal sentiments dominated their campaigns, well packaged to lure the majority of my people in the Volta Region to vote in the direction they have been voting since 1992. It’s an old trick! Be careful not to fall for it.

Some people are deliberately blowing Hon. K.T. Hammond’s issue out of proportion for their usual political gains.

As a Voltarian, I have friends in Togo who are Ewes and are Togolese. So does it mean that the mere fact that my Togolese friends are Ewes and speak my language, it is legal and appropriate for me to invite or aid them to come to my hometown, Atiavi to take part in the upcoming registration exercise and subsequently vote in the December 7th elections? No way!!

The closest a non-Ghanaian could come to our national elections would be to observe. Or we could be generous to allow foreigners to engage in political campaigns just like how we saw former President Mahama’s campaign team invited the renowned Nigerian actor, Osofia to tell Ghanaians why Mahama deserves a second term during our 2016 elections.

The assertion that all Voltarians are NDC or all Akans are NPP is absurd!

There are still educated citizens in Ghana who still hold that weird assertion that if you are from Volta or bear a Volta name, then you are an automatic member of the NDC – almost all tribes in Ghana are culprits. And there are also majority of Ewes who have the erroneous perception that once you are Ewe, it’s an abomination to align with NPP. Some of my compatriots from home will usually go like, “ebu”, meaning you are lost for aligning or supporting NPP (Akan party as they put it sometimes), or for a lack of a better phrase, you are an outcast. What is more absurd than this?

Look, fact is that the NDC have failed my people in the Volta Region for many years. And the only thing they can do to energize Voltarian to renew their longstanding contract of voting for them (NDC) is to engage in some of the tricks we are currently seeing.

I have always lamented about the fact that the level of poverty and impoverishment in the Volta Region is not different from what we see in the Northern part of our country. Unfortunately, the sad story of underdevelopment in the Volta Region is underreported. There is real poverty and limited opportunities for the people in the region largely as a result of leadership failure.

NDC political leaders who have had the opportunity to represent their people in the political office feel lazy to fight for development for our people in the Region. Largely because they know that the mere mention of “Akans will do A, B C to you when you vote for NPP”, is enough to give the NDC the needed votes from their “world bank”. Pathetic!

It’s funny how some members of the NDC want Ghanaians and Ewes to buy into the bizarre idea that NDC as a party is for all Ewes/Voltarians and all Ewes are for NDC. On this one, I think some of my fellow Voltarians are still being scammed.

If Ewes think or are still in illusion that they “own” NDC, let them look within their party, take a closer look at the current leadership of their party and judge for themselves the tribe that really “owns” NDC. Trust me, most of my people back home will struggle to pronounce the names of the current National Executives of the NDC because they are largely non-Ewe names. Likewise, most of the National Executives will struggle to pronounce my last surname correctly. But they are steering the affairs of a party believed to be a preserve of Ewes!

Politics at this time should be based on relevant issues – issues of bread and butter for the ordinary people in our various communities we are seeking to lead in our political offices. If you have a message as to how you are going to lead the development process of our country, sell it and stop playing on people’s emotions to gain votes.

When governments implemented national social interventions such as The National Health Insurance Scheme; Free Maternal Care; Free Senior High School; School Feeding Programme; Capitation Grant; Livelihood Empowerment Programme among others, to the best of my knowledge, the people of Volta Region and Ketu South were not left out. Or?

So where from this tribal politics of who is a Ghanaian and who is not a Ghanaian in Ghana?

The conduct of the NDC in this matter could be equated to the usual Ghanaian attitude where family members or friends will not support you with even a pesewa or visit you when you are on your sick bed. But will rather invest huge sums of monies purchasing the most expensive funeral clothes, travel several kilometers to attend your funeral when you are dead, to show how much they care. If you look at the conduct of the NDC closely, you will realize that is what they are doing to my people in the Volta Region.

Forbes names Akufo-Addo 'African of the Year'
13 minutes ago