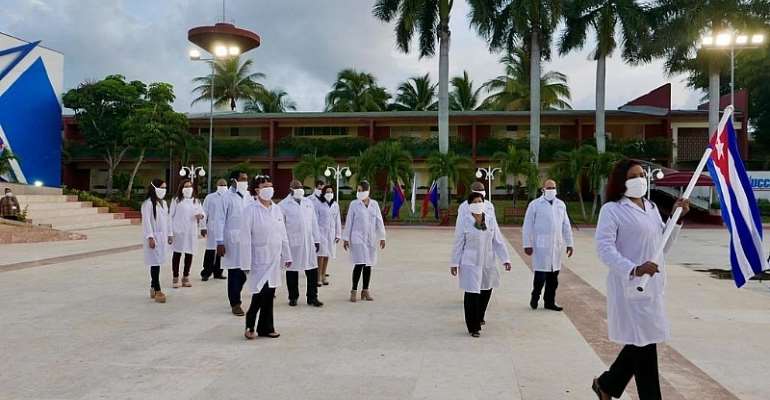 Cuba has sent a delegation of 15 doctors to the French overseas territory of Martinique to help local staff deal with health emergencies as well as respond to the Covid-19 crisis. This comes as patients from French Guiana are being evacuated to Martinique and Guadeloupe to alleviate pressure on the local hospitals.

The delegation of 15 Cuban doctors arrived in Martinique for a two-month mission on Friday, the first of its kind in the French territory.

Under a decree issued in March, Cuban medical teams can intervene in French territories such as Guiana, Martinique, Guadeloupe, Saint-Martin, Saint-Barthélemy, and Saint-Pierre-et-Miquelon.

Among the members of the team, there are specialists in pulmonology, infectious diseases, radiology and emergency medicine, according to authorities.

They will also assist in dealing with the Covid-19 crisis.

Doctor Cobaz Mesa told RFI correspondent Domitille Piron that the mission represented more than just medical help, it was a source of pride for his Cuba.

"France like with any country needs medical help and above all, unselfish, disinterested help. The only thing that motivates us is to save lives, that's the most important thing in the eyes of a Cuban doctor."

In total, some 30,000 Cuban doctors have been deployed in the yearly programme which operates in 60 countries, under a scheme put in place by Fidel Castro in 1960.

Since 2000, when Cuba began charging wealthier countries for this service, it has become one of the key sources of revenue for the island nation.

In a separate development, local news reports that four Covid-19 patients in intensive care from Guiana have been transferred to Martinique; and one from Haiti. Two others will soon arrive in Guadeloupe.

Health authorities said other evacuations would occur in the coming days to alleviate pressure on the emergency services in Guiana.

A protocol is being drafted between hospitals and medical crisis directors sent by French public hospital management to define the conditions for these medical evacuations.

France's Minister for overseas territories, Annick Girardin said on Wednesday that the peak of the epidemic was due to hit French Guiana around mid July and the situation was worsening.

She called for staff from the mainland to join colleagues in Guiana where there is talk of reintroducing lockdown measures due to the rapid rise in the number of Covid-19 cases.

The rise in cases in neighbouring Brazil has been one of the key reasons behind the difficulty in containing the virus.