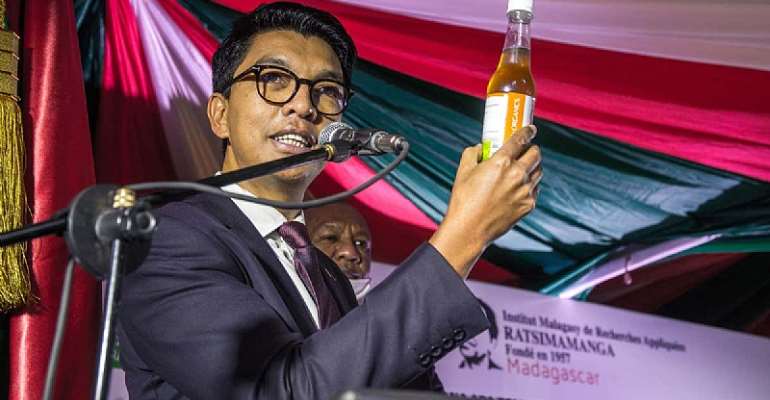 The leakage of multiple intelligence of plot to kill the Madagascan President, Andry Rajoelina over his controversial herbal cure for Covid-19 is very worrisome. Information I am getting from sources among leaders of the Church of Jesus Christ in Madagascar (FKJM) suggests that the populace, especially the elites and religious leaders, are aware of the leaked plot to kill their President for bringing a cure for Covid-19 and destroying the multi-trillion-dollar vaccine businesses of multinational pharmaceutical alliances and concerns.

Church leaders in Madagascar have told me that they cannot understand why the WHO is against their small country, harassing their scientists, disparaging their claims, trying to poison their herbal remedies, instead of seeing them as partners in progress. They believe that God will not allow them to suffer another political crisis that came to an end since Andry Rajoelina became President.

A close top international diplomatic source had hinted me earlier in the month that the Madagascan President’s alleged cure for Covid-19 will bring him in conflict with the cabals that want to control the vaccine world and he hopes African leaders be strategic enough to rally around Rajoelina when it starts. Another top security intelligence source with one of the Western nations, last week told me that a challenge of the WHO, the type Rajoelina is doing, is an invitation to “national chaos and mourning” and expressed concerns that the dispute over the Madagascan organics be resolved before the Madagascan President is seen as ‘a dangerous obstruction’

These two credible diplomatic and intelligence sources are among the international network of people that had always given us credible information from the time we fought corruption and insecurity during Jonathan era in 2011, through when we covered the activities of Boko Haram, including when they terrorized Abuja, Kano etc. and when Western powers decided that Jonathan must leave Aso Rock, till just recently when the plot to depose Sanusi as Emir of Kano was sealed. Therefore, getting hinted from these sources that a serving President could be eliminated was very worrisome.

Yesterday I got a report obtained by the Nigerian voice news outlet of a group claiming possession of intelligence of an attempt to assassinate the President of Madagascar. The group, in a statement, said

“The attention of the Pan-African Unity Movement Against Second Slavery (PANUMASS) has been drawn to credible leaked intelligence about possible murder of the constitutional President of Madagascar, Dr. Andry Rajoelina , for not giving up to his country’s herbal medicinal cure for Corona virus pandemic. From credible intelligence gathering and information available, apart from the assassination of African leaders by enemies of African people, there has also been a hate campaign of destruction meted on African scientists, particularly traditional healers.

“The Pan-African Unity Movement Against Second Slavery (PANUMASS) would vigorously condemn any plot this time to destroy an African leader. This deplorable act, to single out the Madagascar leader for assassination, for no crime other than for fighting to save the African population, is condemn-able.

“Today again, the President of Madagascar Andry Rajoelina is the target for assassination to cover the deception surrounding COVID-19 virus pandemic, and WHO (World Health Organisation) conspiracy to kill millions of Africans. Reports in a Tanzanian newspaper that WHO attempted to bribe President Andry Rajoelina $20 million dollars to poison Madagascar’s medicinal cure for COVID-19 is unfortunate.

“There is already a leaked intelligence making the waves, about a big plan to assassinate the Madagascan President in a desperate attempt to destroy the cure for COVID-19. According to the leaked intelligence, WHO is under pressure from big pharmacy companies and governments to stop Madagascar’s herbal cure”

“We urge African leaders not to be lured into WHO’s misrepresentation and racist attacks against President Andry Rojoelina. We urge Madagascar not to stop treating people who are suffering from this deadly pandemic. It’s high time Africans extend solidarity with Madagascar in the fight for bringing an end to COVID-19. WHO should understand that the entire Africa and blacks everywhere are behind President Andry Rojoelina, and that no destructive force from outside will come to Africa in harming this great leader. African leaders, through the African Union (AU) should do everything to protect the Madagascan leader from evil people. They have been killing Africa’s great leaders for their stand in bringing developments to the African content. This is the time Africa should stand as one for peace, stability, development and prosperity”

The group based in Freetown, Sieraleone has Alimamy Bakarr Sankoh, a former Presidential candidate, as its Interim President.

African leaders should wake up! Satanists and vaccinists wants millions to die and the continent turned to testing ground for all sorts of experiments. I have explained all these in the following write-ups

I urge all Africans, Christians, Muslims, Pagans to intercede and outcry so that those bent on eliminating the Madagascan President will jettison their plot. We have lost Pan Africanists to all manners of vagaries by those who detest African self-renaissance; Patrice Lumumba of Congo, Kwame Nkrumah of Ghana, Thomas Sankara of Burkina Faso, among others, are African leaders cut down because of their Pan African mindset, leaving us with clueless, corrupt and wicked elements that looted the continent and instituted poverty.

In July 2014, after Muhammadu Buhari, escaped assassination attempt masterminded by Boko Haram members within the then ruling party, killing over ninety persons at Kawo junction, Kaduna, I wrote a piece titled ‘PDP Boko Haram: Before They Kill Buhari and Brew another Civil War’ and warned the assassins that

“If Buhari had been assassinated, the northerners will abandon the PDP Boko Haram members among their people and descend on Igbo businessmen and women and slaughter them in their tens of thousands, the Igbos will in turn slaughter back some northerners and another civil war will start. In the event of a Buhari assassination, Muslims will rise up against Christians in anger and Christians will respond promptly, leading to another religious conflict in Africa's most populous nation”.

Let’s pray and outcries before they kill the Madagascan President due to his country’s organic cure for Covid-19 to pave way for predicted millions of pandemic casualties in Africa.