France's emergency law is delayed despite relaxing of coronavirus lockdown 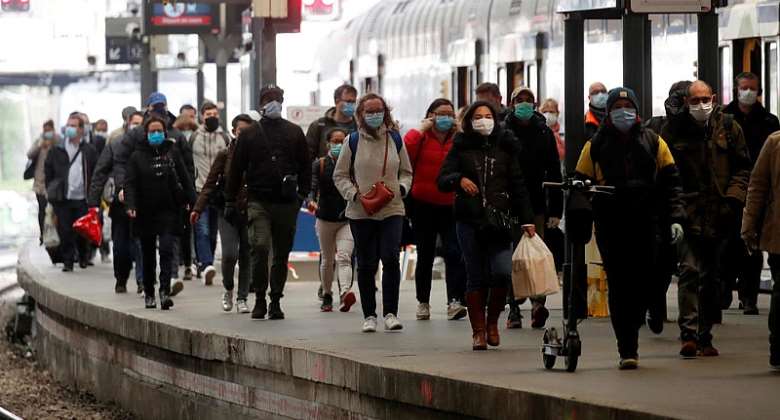 Thousands of workers returned to their jobs on Monday amid confusion after the government failed to ratify a health emergency bill in time for the gradual lifting of its Covid-19 lockdown.

France emerged from a near 2-month lockdown slumber on Monday with question marks hanging over its health emergency bill meant to determine exactly what activities people are allowed to do.

The bill was passed in parliament on Saturday but stalled when it got to the Constitutional Council. MPs and senators had been expected to ratify the legislation on Sunday night in time for the country's reopening. Their verdict is now anticipated for later this Monday.

The delay meant that thousands of workers returned to their jobs not knowing whether they needed a compulsory work certificate and how far they were allowed to travel.

The emergency health bill, still pending, incorporates measures limiting the public's movement to a 100km radius and obliging them to carry proof from their employer justifying their reason for taking public transport.

Critics blast "amateurism"
In the absence of clarity, the government instead appealed to French people “to be responsible” to prevent them exploiting the gap in legislation and gallivanting hundreds of kilometres across the country.

However, the confusion created queues in some meto stations in the Paris region, where commuters are obliged to show a work certificate for travel between 06:30 to 09:30 and 16:00 to 19:00 local time.

Those rules will now be enforced from Wednesday and anyone failing to show a valid work certificate will be fined, according to Valérie Pécresse, the Ile de France regional president.

To maintain efforts to limit the spread of the coronavirus, the government has issued a temporary decree making face-masks compulsory on public transport, allowing shops and businesses to reopen under strict social distancing rules and restricted public gatherings to no more than ten people.

Nonetheless critics, including the far-right National Rally, were quick to flag up the government's "amateurism" in not getting the health emergency bill passed in time.

What the bill does
The bill gives the government extraordinary powers to restrict people's freedom of movement and rule by decree to requisition certain goods and services, until 10 July.

The bill also empowers the government to take special measures in support of French companies hardest hit by the virus outbreak.

Shops, bars, and restaurants and other businesses considered non-essential are to remain closed.

In addition, incoming travelers from abroad will be subjected to a two-week quarantine.

More fundamentally, the bill also enables the government to set up health brigades to track down potential positive cases to try to stay one step ahead of the virus. This has led to discussion about the lawfulness of the regulations.

The new brigades, which were unable to start on Monday due to the delay in passing the health emergency bill, will be independent from the state's controversial Stop-Covid app according to officials, amid concerns over privacy.

France on Sunday reported 70 more deaths from the coronavirus, its lowest daily toll in recent weeks, bringing the total toll in hospitals and nursing homes from the pandemic to 26,380.