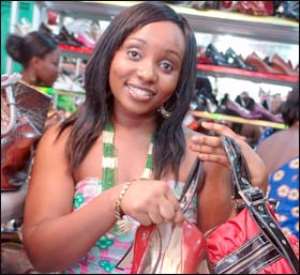 CONTESTANTS OF Ghana's Most Beautiful, TV3's ongoing reality show, took some time out of their busy schedule, to tour the premises of Emmaco Fashion House at Dansoman Sahara opposite the Amal Bank, in Accra.

They used the opportunity to familiarize themselves with the management of the fashion house, which has for years supported the entertainment industry in Ghana.

Management also used the occasion to brief the contestants about the operations of the Emmaco Fashion and Unisex Boutique, presenting the contestants with shoes and clothes.

The managing director of Emmaco Fashion, Eunice Odura, who interacted with the contestants, encouraged them to be bold during their performances on stage.

As a showbiz personality herself, Madam Odura hinted that her outfit has been supporting the industry as well a section of its players.

According to her, she had put in place packages, including discounts, for all the stakeholders and players in the entertainment industry who visit her outfit.

Emmaco Fashion and Unisex Boutique deals in all kinds of clothing including ladies and gents wear, shoes for all ages, assorted cosmetics, bags and ladies suits, among others.

The fashion firm, since it was established a couple of years ago, has been providing costumes to actors and actresses, television newscasters, musicians, among others.

In a related development, the final event of Ghana's Most Beautiful, comes off this Sunday at the National Theatre in Accra.

Among artistes expected to perform at the event are K.K Fosu, Kofi B, King David, Kofi Nti and Samini.

They are expected to electrify the whole auditorium with their music. By George Clifford Owusu