Silvastone Up For MOBO Award 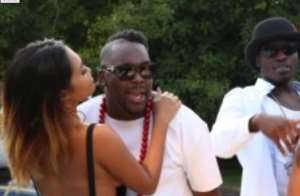 Music artiste, producer, DJ and songwriter Silvastone says his nomination for the MOBO awards is a dream come true.

He tells YFM-Kumasi’s Kwame Scientific he has always desired the award but did not know how.

“The nomination is such a blessing and it is enough for me. it is winner status for all nominees”.

Silvastone revealed his mum hails from Kumasi in Ghana whiles his dad comes from Sierra Leone though he is unable to speak the Akan language spoken by Ashantis.

He has worked with other musicians including Sway, Sarkodie, Sister Deborah, Chakademus among several others and has been announced by BBC radio 1 xtra as one of the African artistes to watch out for in 2015.

He called on all Ghanaians to support and vote for him to win the award by logging on to www.mobo.com and then signing in with their Facebook or Twitter accounts after which they can navigate to the “best African Act” category and vote.

Kwame Scientific was the first DJ in all West Africa to drop the skata musician’s latest hit; “my place” feat. Sneakbo

Meanwhile the awards ceremony is slated for 4th November, 2015.