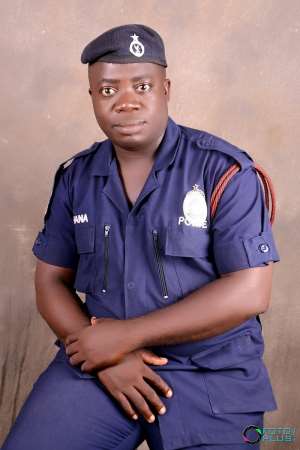 Rev. Gabriel Ansah,made his passionate appeal to the IGP during an inspirational studio chart with Officer Ofori:

"I was born to serve. God protects we the Police and he is supreme. It's through his favor that we are also able to provide protection"Officer told Rev.Ansah after being asked about how he combines his work with music.

Officer, throwing more lights again said,"I discovered my talent when I was 14yrs but was able to record after serving a pastor at the Methodist Church at Akyem Maase,I then joined the teaching Service,the Police Service and now serving God and Man through this music .So actually,i was born to serve".

"wow,you are really doing well and worth celebrating .The IGP must do well to promote you and other police officers spreading the word of God through gospel Music",Rev.Gabriel Ansah also said.

Officer Kwasi Ofori is with the legal and prosecution unit in Accra.

Hottest Photo Reports
Catch up with all the political quotes from our politicians.
Advertise here
More from General News
ModernGhana Links
Witchcraft is when you support an unknown country against Black Stars — Empress Gifty fires
Ghana will win the World Cup — John Dumelo predicts
Hajia4real back to Instagram
TOP STORIES