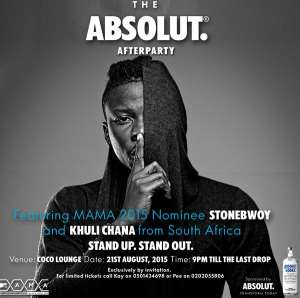 A few weeks after the 2015 MTV Africa Music Awards KwaZulu-Natal (MAMA) rocked Durban, ABSOLUT Vodka is set to rock Accra with the biggest most exclusive after party ever.

The ABSOLUT AFTER PARTY is in celebration of the sponsorship of MAMA’s and of all the nominees from Ghana. The premium brand Absolut Vodka is more than thrilled to announce this event as sponsors of the Best New Comer Award, “Best New Act Transformed by Absolut”.

Setting the dance floors of the plush Coco lounge and Urban Grill on fire on the turn tables will be Accra’s hottest DJs .

Doors for the ABSOLUT AFTER PARTY open at 9:00. Invitations will be sent out prior to the event.