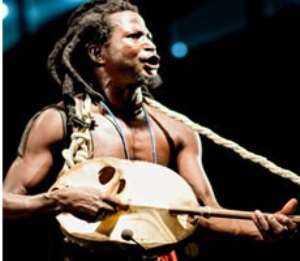 Though Ghana's statutes indicate that wee-smoking is illegal, many have speculated that its usage is common among musicians in the country.

Commonly referred to as Ntampi, Ganja, Taaba and Master Weaver among others, many have argued that those who condemn wee-smoking are ignorant of its medicinal values and King Ayisoba is an ardent believer of such claims.

In a video which is rumoured to be leaked version of Ayisoba's latest VCD titled, The King Ayisoba Story, which is currently making rounds on various social media sites, the King of Kologo music in Ghana is captured praising the medicinal prowess of Ntampi.

According to King Ayisoba, he gets ideas to create his music after smoking wee.

He said that even though he doesn't like alcohol, he has been a wee smoker from his childhood days and has been smoking for over 25 years.

“I have never liked alcohol. Even if you see me taking alcohol, then it is pito or juice. But I have been smoking for a very long time. People say I no be somebody who can do something better because I smoke wee. But later dey see say I come hit but I smoke too. When I smoke wee, I take my guitar and get ideas. I see what is coming to happen to do my music. We smoke to create and do something better,” he said.

Justifying his reasons for smoking wee, King Ayisoba argues that most legends including Ghana's first President, Dr. Kwame Nkrumah were all smokers including other influential people all over the world.

He noted that wee smoking gives people the right senses to do something better, remarking that “it is medicine for me.”

King Ayisoba argued that people who disregard wee smokers do not know how valuable wee is to the smoker.

“Taaba also help me. Is medicine for me. It gives me idea. I didn't smoke wee to do bad. So if you see somebody dey insult about the wee, wee is not fine, I think the person, he don't know the inside,” he stated.