Funeral for Whitney Houston is Saturday 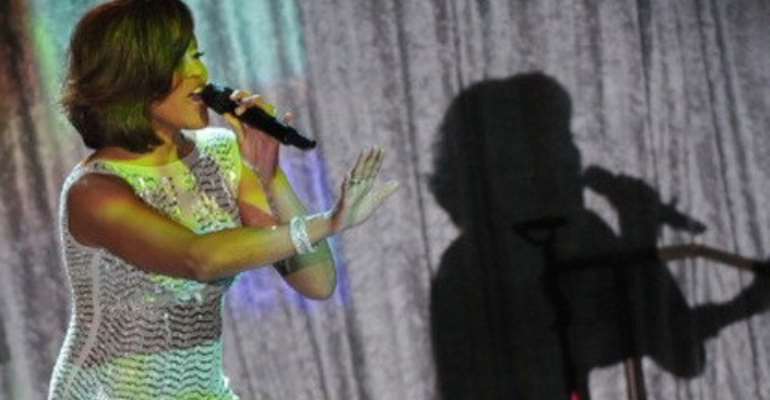 The funeral for pop superstar Whitney Houston will be held Saturday at her childhood New Jersey church, according to the owner of the funeral home handling the arrangements.

(CNN) -- Family and close friends will say goodbye to Whitney Houston with a private funeral and burial Saturday in her native New Jersey, trying to come to grips with grief that the pastor of her childhood church called "very deep."

"We are all hurting," Pastor Joe Carter of New Hope Baptist Church in Newark told CNN's Jason Carroll on Tuesday. "That voice is silenced. But she left us with so much."

Earlier in the day, Carolyn Whigham -- the owner of Whigham Funeral Home in the northern New Jersey city -- said that Houston's funeral will start at noon Saturday at that church.

Carter said that he'll officiate what he described as a "small ... invite-only service." The church seats a maximum of 1,500 people, and the pastor said he expects "all these empty pews to be filled with people whose hearts are broken."

"She was able to leave us with so many wonderful memories of that God-given gift," he said. "That's what we are celebrating on Saturday."

At the request of the late singer's mother Cissy Houston, the eulogy will be given by Marvin Winans, a gospel singer and pastor at Detroit's Perfecting Church, Carter later told CNN's Erin Burnett. Winans officiated Houston's 1992 marriage ceremony to R&B singer Bobby Brown.

New Jersey Gov. Chris Christie told reporters Tuesday that he planned to issue an executive order so that flags at government buildings throughout the late entertainer's native state would fly at half-staff on the day of her funeral.

There will be no large-scale public memorial in Newark in the immediate aftermath of Houston's death, city spokeswoman Anne Torres said. The funeral director at the Whigham Funeral Home told city officials that the family did not want a big memorial, according to Torres.

Carter, the New Hope pastor, said organizers hope to set up a large screen outside his church, so people who cannot get inside can see the funeral proceedings.

The pop superstar's body was flown to New Jersey's Teterboro Airport from California on a private plane belonging to filmmaker Tyler Perry, according to a law enforcement source with knowledge of the situation.

Late Monday, her body arrived at the Whigham Funeral Home -- borne by a hearse and escorted by police -- as a large crowd looked on. Cissy Houston, the late singer's mother, was waiting inside, police said.

New Hope's pastor described Cissy Houston -- herself a well-known gospel singer who was active at the church -- as a "strong, strong woman."

"Her heart is broken: Nobody expects to bury her child," Carter said. "But she is managing it with miraculous strength. She is so grateful for prayers and thoughts, and that's holding her together."

Whitney Houston, 48, was found dead Saturday in her suite at the upscale Beverly Hilton, just hours before she was scheduled to attend a pre-Grammy bash at the hotel.

Why she died remains a mystery.
Despite widespread media speculation, a Los Angeles County coroner official Monday downplayed the suspicion that drugs played a major role.

Assistant Chief Coroner Ed Winter said that "not many prescription bottles" were found in the singer's room after her death. The amount of medications recovered by investigators was less than what is usually present in deaths attributed to overdoses, Winter said.

"I know there are reports that she maybe was drowned or did she overdose, but we won't make a final determination until all the tests are in," he said.

Winter ruled out foul play and said there were no injuries to Houston's body.

The singer's soaring voice and impressive talent had taken a back seat in recent years to her struggles with drug addiction.

However, a close family friend who was also at the funeral home told CNN's Deb Feyerick on Tuesday that Houston was "no longer an addict," meaning she was no longer using "hard drugs." The friend said Houston was taking medication for a throat infection and Xanax for anxiety and to help her sleep. And it was not uncommon for her to have a drink when she went out, he said. The friend asked not to be named because of the sensitivity of the situation.

He said he had seen Houston about two weeks ago in New Jersey, and she told him, "I'm at a comfortable place in my life."

The friend said Houston had been "clean" from hard drugs for three years and had not used cocaine or marijuana, and added that her family is upset by media coverage focusing on her history of drug problems.

"In her life, she made some bad decisions, but let's not forget the good ones," he said, recalling how she returned to Newark at Christmas and gave to those in need. "... She took care of foster children, and children with AIDS."

And a singer who participated in an impromptu duet with Houston at a party Thursday night said Houston was not behaving erratically.

"I didn't see someone who was high," Kelly Price told CNN's "Starting Point" on Monday. During the party, Houston took the stage unexpectedly and sang a hoarse rendition of "Jesus Loves Me" with Price.

Whitney Houston: A mother, a daughter, a friend
Houston's body was released to her family Monday, a day after an autopsy was conducted in Los Angeles.

Winter, from the coroner's office, said that results of toxicology tests could take six to eight weeks, though Beverly Hills police Lt. Mark Rosen said Tuesday that the coroner's report is expected to be finished sooner -- in two to three weeks. That report's conclusions into what Rosen now describes as an "unattended, unexpected death" will drive what investigators do next, the police spokesman said.

Beverly Hills police have requested a "security hold" on the coroner's report, a common practice in high-profile cases that limits what can be revealed about an investigation while it is ongoing.

Reverend: The Whitney I knew
Asked how long Houston had been dead before she was found, Winter said she only that she was seen alive within an hour of her death.

Houston's body was found by her assistant, Mary Jones, who was often called "Aunt Mary," a family source said Tuesday. Earlier, Winter had confirmed reports that the songstress was found in the bathtub of her hotel room.

Houston's 18-year-old daughter, Bobbi Kristina, was in the care of her grandmother Cissy and her father, Bobby Brown, the close family friend said Tuesday. Houston and Brown divorced in 2007.

Brown released a statement Tuesday saying his daughter, after a "visit with doctors at Cedars-Sinai Medical Center in Los Angeles on Saturday," is now "with my family, including her (half-) siblings."

"Obviously, the death of her mother is affecting her," said Brown, known as a member of the group New Edition. "However we will get through this tragedy as a family."

LZ Granderson: Sad, but no shock
On Monday night, Aretha Franklin -- the singer known as the "Queen of Soul" and Houston's godmother -- honored her at a concert in Charlotte, North Carolina, according to CNN affiliate WSOC.

Franklin called Houston "one of the greatest singers that has ever stood before a microphone," and sang Houston's smash hit song, "I Will Always Love You," the station said.