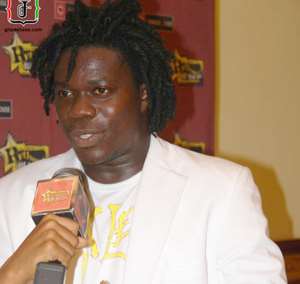 Executives of the Musicians Union of Ghana (MUSIGA) have paid a courtesy call on the Vice President of the Republic of Ghana, John Dramani Mahama, at the Castle, Osu in Accra.

The executives, led by the president of the union, Bice Osei Kufour aka Obour, briefed the Vice President about the projects being undertaken by the union.

Obuor told the Vice President that the union would chart a new path to develop musicians and other collaborators to send Ghanaian music to the international market.

According to him, it would also encourage its members to compose songs that would promote national unity and tolerance.

The MUSIGA president used the visit to thank the government for allocating GH¢2 million to the creative industry in the country.

On his part, Vice President John Dramani Mahama pledged government's commitment to partner the Musicians Union of Ghana (MUSIGA) to fight against piracy of works of artistes and other intellectual property.

According to him, his government wanted to create a situation where musicians and other intellectuals would reap the full benefits of their efforts in the system.

He noted that the days that Musicians dwelt on popularity, but wallowed in poverty were over, adding that government would work closely with the Attorney General's Department to procure the necessary documents for them to implement all the laws against piracy.

He said, 'Creative industry is paramount in government's development agenda as we are so much aware that it can create a number of jobs for people to live comfortably in the country,' The Vice President disclosed that previous governments found it difficult to support them because of their divided front and hoped that the current unity they were enjoying would continue to encourage government to scale up support for them.

In a related development, MUSIGA has cleared the air about government's GH¢ 2 million budget allocation to the union.

According to the union, the allocation follows a proposal it submitted to government through the Ministry of Chieftaincy and Culture and Ministry of Trade for financial assistance.

Minister of Finance Dr Kwabena Duffuor, in his presentation of the 2012 budget last Wednesday, November 16, announced that government had set aside GH¢ 2 million to MUSIGA for the development of the creative arts industry.

The news was not well received by some stakeholders of the industry who questioned why government singled out the music industry for that amount of money, leaving out other sectors like visual arts, performing arts, movies, publishing among others.

But spokesperson for MUSIGA, Okyeame Kwame, told Adom Entertainment News that the union presented a proposal to government for funds to facilitate their activities.

He said the proposal contained a five point development plan drafted by the union's new executives to rebrand the music industry in Ghana.

He disclosed that the first project MUSIGA would embark on was to conduct a research to assess the contribution of musicians to the Gross Domestic Product (GDP) of Ghana and establish a training centre for young and upcoming musicians to improve their artistic skills.

Okyeame Kwame also stated that they would invest in the promotion of music in schools to inculcate creativity in Ghanaian students.

He commended the Ministry of Chieftaincy and Culture and the Trade Ministry for their role in the allocation of the funds.

'For the first time after Ghana's first president Osagyefo Dr. Kwame Nkrumah, the incumbent government has shown high interest in the music industry and deserves commendation,' he added.