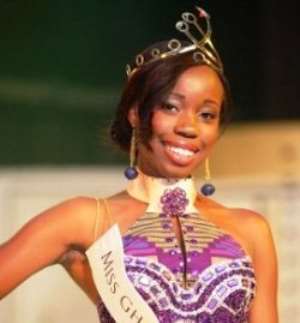 Ghana's most coveted beauty pageant 'Miss Ghana' would not come off for this year (2011).

The pageant has been cancelled because the organisation is changing hands from 'Media Whizz Kids' to 'Exclusive Events Ghana'.

Media Whizz Kids, which has been organizing the pageant for over ten years, handed over the organisation some time ago to 'Sparrow Productions Limited' another event organisation outfit in 2004.

It was handed back to Media Whizz Kids after several controversial issues including lawsuits.

Exclusive Events Ghana, an events management and production company would be the third company to organize the prestigious event and this would be officially announced at a press conference on October 4.

She is also expected to represent Ghana at the 2011 Miss World Pageant in London, which is scheduled for November 6.

She would leave Ghana on October 19.
Source: Citifmonline