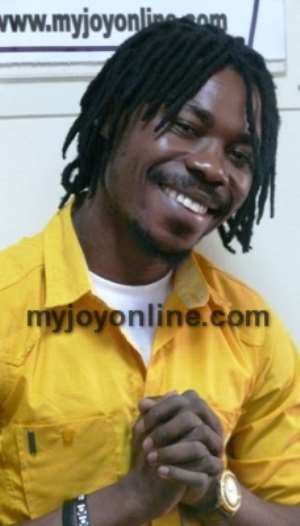 
Frank Elinam Cobbinah known in showbiz circles as Atumpan has said his much talked about smash hit The Thing which is currently enjoying heavy rotations on radio is a gospel song contrary to perceptions that it is profane.

The artiste speaking in an interview with Myjoyonline.com said as much as he is excited about the huge reception the song has received, there is no profanity attached to the lyrics of the song.

As per his definition, the 'thing' "is anything teachable [and] discussable; anything that someone can admonish someone about," adding that, "any song that you sing that will make people happy, that can turn someone from doing a wrong thing is gospel music."

"I can call small girl you don't know the thing as a gospel music because I am actually teaching and the philosophy of the song is about advising young ones; teaching young ones and trying to put them on the right path."

He refuted perceptions that the song is profane stating, "it is not profane. Being a writer, I intentionally put a twist to it... The song itself is very metaphorical and it is very poetic. I made it vague, I didn't want to go straight to the point that this is what I am talking about so people can relate it to different situations provided it suites their understanding."

Spending half of his life in the Garden City, Kumasi, Atumpan started music in a choir as a turner singer who graduated to a choir master. He embraced commercial music officially in 1999.

Interestingly, Frank is a teacher by profession, a profession he has vowed never to quit, and holds a Diploma in Basic Education. He is currently persuing a Bacholer of Education in English at the University of Education, Winneba.

He revealed that he wrote the song, which originated from a popular Ghanaian folk song in 2007, but recorded it for the market in December 2010.

According to him, The Thing which was released in February 2011 is the official single of his album, Ghana Get It All, which will be released at the end of July. He however promised to whet the appetite of Ghanaians with another single, U like it next week.

The artiste who spots neatly woven dreadlocks and describes his music as a commervercial explained, "I am doing hiplife with a bit of controversy and commerciality attached to it" adding, he hopes to change the face of Ghanaian music with his unique blend of music and style.

His 12-track album, Ghana Get It All, is aimed at letting the world know that Ghana is paradise and it has a lot of good things.

It contains tracks such as Temptation, Music is Life, Bad Girl and the remix of The Thing which will feature Sarkodie and VIP including a jazz version of The Thing.

Atumpan was recently featured on an international single, Feels Good, that also featured acts such as Jamaican super star, Sizzla, Gina Lee of Canada and Crystal Caines from USA. That single will also be released next week in the US.

He disclosed that he will be touring the length and breathe of the country after the launch of the album. The regional and district tour which starts September this year will run through to next year and will include a visit to some of the country's Senior Secondary Schools.

Frank is currently under the management of Jay Foley/2131 Records and the Canadian based management, Sunset Productions.

Atumpan is seriously dating and will be marrying very soon. He has been blessed with a 3-year daughter.