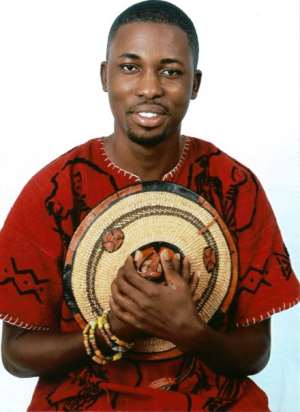 The musician said though he does not have a child with Anita, she is light-skinned and he has a soft spot for light-skinned girls and easily falls in love with them.

'People know that I like fair girls and the icing on the cake is when the person works in the bank… I keep telling people; Anita Owusu is my good friend. Me, I will have many children so if I have a child with Anita Owusu, I will go and take the child.

'Secondly, Anita Owusu and me don't have a baby (sic). We were just good friends. Perhaps people are saying this because they know that I like fair girls and the icing on the cake is when the person works in the bank,' he noted on eTV's Late Night Celebrity Show.

However, his comments about his choice of woman came a day ahead of the screening of his 'A-Plus show' on eTV last Thursday at 10pm.

The first episode of the comedy show was watched live from 9pm to 10pm on a giant screen at Semi's Place at Asylum Down.

The one hour stand-up comedy show touched on the lighter side of things, ranging from politics to everyday life. It is also designed to serve the purpose of a social commentary and will be used to foster unity in society.

Some interesting segments of the show included musical performances by Mimi and the adventures of Mr. Siaw, a five-minute drama comedy  which was performed by Kwame Amo of Okay FM and Clement Bonney of 'Mr. Beautiful fame'.

Other segments of the show included the stand up comedy segment, which was the climax of the show. It was interlaced with a mind-boggling interview with a gynaecologist.

What Will The Publication Of 260-Page Cocoa Road Audit Repor...
16 minutes ago