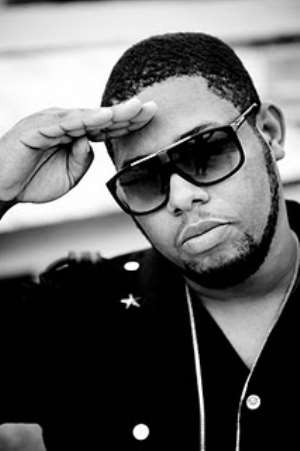 His first single “Somebody ft. Kwabena Kwabena” received massive t.v and radio play and saw Hip hop and High Life Music merge for the first time in Ghanaian history. He then followed up with the massive club banger “Get on da Dancefloor” and since then it's been “Yes Boss FEVER”!

D-Black from April this year embarks on a 4 - nation Music Tour with his Black Avenue Muzik Team. These 4 countries include Ghana , South Africa, Kenya and Nigeria with his motherland Ghana being the first country to kick of the Tour.

“We're doing 10 cities in Gh, from Sunyani ,Takoradi, Koforidua, Cape Coast , Kwahu, Akosombo, Accra, Tamale, Tema and Sunyani in the Space of 5 weeks says D-Black between April and May. I Just want everyone to experience what Ghanaian Hip hop is. I love music and this tour is just me showing and spreading the love i have for music with the people of Ghana” .

New artist on “D-Black's Black Avenue Muzik label” ; the 18 year old Dee Moneey whose first single “Kpokpo o Body” was released commercially barely a week ago says “It's gonna be an exciting experience for me, i'm only just turning 18 and i'm going on tour mannnn! I'm grateful to God and now i can promote “Kpo Kpo O Body” all over Ghana and outside of Ghana too. This year's gonna be a great year for us”.

Fellow affiliate to the Black Avenue Label ; Dr. Cryme's Music Video for his hit song “Kill Me Shy” is also being readied for release next month.

“I'm really happy Ghanaians have shown me this much love and support since popped up on the music scene two years ago. I only started rapping seriously 2 years ago and gradually God is taking me to greater heights.” Says D-Black.

“I'm donating proceeds from this tour to needy children and physically challenged kids in society as part of my responsibility to society. All u have to do is write to Black Avenue Muzik at P.O.Box 15013, Accra North or email [email protected] wherever you are in Ghana, when were in your city we'll pay you a visit and donate towards a child's education. Education is key and i was fortunate to have a good education so this is my way of helping the less fortunate” D-black added.

We're also doing A High School tour programme and we start with Cape Coast's Adisadel College on Saturday the 5TH OF February and Off to Okuapeman Secondary School . There are about 20 - 30 schools lined up that we'd like to visit this year says Robertson Debrah ; Artist Manager at Black Avenue Muzik.

The Channel O Awards '09 & '10' nominee , Rated Africa's number 2 Anglophone Rapper for 2010 and recipient of over 14 Awards nominations between 2009 and 2010 continentally is also being tipped to win a few more at the upcoming Ghana Music Awards Festival this year.

WATCH OUT FOR THE D-BLACK YES BOSS TOUR IN A CITY NEAR YOU THIS APRIL!!