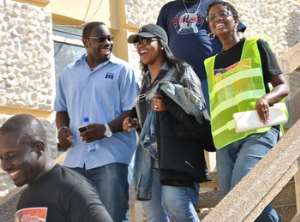 
American gospel icon and queen of praise, Cece Winans touched down Tuesday afternoon at the Kotoka International Airport, all ready for the 2010 edition of Adom Praiz 2010.

The night-long gospel concert is the second since its institution in 2009 as an annual praise and worship platform to honour God for the fulfillment of His promises.


Cece on arrival at the Kotoka International Airport

The eighth of ten siblings in the musical Winans family, CeCe Winans, according to www.netglimse.com, performed most often with her brother, BeBe, in a duo which recorded gospel material with R&B settings and proved to be the most commercially successful of the Winans groupings (which also includes her older brothers Marvin, Carvin, Ronald, and Michael in the Winans and her parents in Mom & Pop Winans).

She worked with BeBe in a duo called the PTL Singers until 1987, when they released their self-titled debut album (with vocal contributions from nine members of the family).

Four albums followed during the next seven years (two of which hit gold) plus 1991's platinum Different Lifestyles. The duo's success increased as they added more contemporary forms of production -- their two number one R&B singles, "Addictive Love" and "I'll Take You There," both treated spiritual love in fuzzy terms just as conducive to the physical. After 1994's Relationships, CeCe began recording her very first solo album.

Released in 1995, Alone in His Presence found her working her way back to traditional gospel, singing standards like "Great Is Thy Faithfulness," "Blessed Assurance," and "I Surrender All." His Gift followed in 1998, and a year later Winans returned with Alabaster Box.