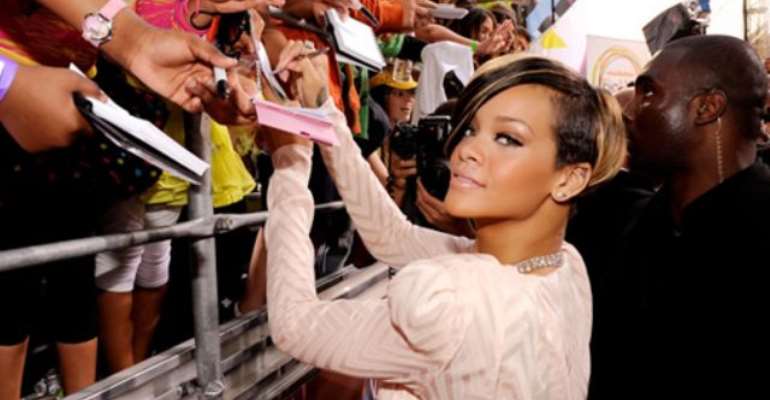 Rihanna is reportedly stepping up her personal security after receiving X-rated letters from a crazed fan.

The 'Rude Boy' singer is said to be shocked by the graphic fan mail and her rumoured boyfriend, baseball player Matt Kemp, is believed to have stepped in to make sure the obsessed letter writer, who calls himself 'Buster', can't get to her.

A source told the Daily Star newspaper: 'Matt has asked Rihanna's team to be extra cautious since she was sent two very steamy letters.

'Her friends are also concerned about the situation. They spent a long time talking about it when they dined at the Spanish Kitchen in West Hollywood last week.

'They are really worried things with this guy are going to get out of hand.'

In what could be a result of her new security measures, the 22-year-old singer reportedly had a gold golf cart when she appeared at the Nickelodeon's Kids' Choice Awards in Los Angeles on Saturday night (27.03.10), which took her just 17 metres from one side of the backstage area to the other.

Rihanna also performed at the annual ceremony, playing three songs, 'Hard', 'Rude Boy' - during which she danced with two huge robots - from her fourth album 'Rated R' and 'Don't Stop the Music' from her 'Good Girl Gone Bad' album.

Speaking at the awards, Rihanna revealed she intends to develop her sound on her next record.

She told MTV: "'Rated R', I love the sound of it, in terms of the bass. I really like the bottom, the grime of it. But if I were to combine that with more energetic, up-tempo pop records, then I think that will be a happy marriage. And that's where we'll probably go next."