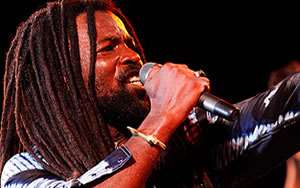 One of the world's biggest headline acts in the music fraternity, Rocky Dawuni, has been suggesting what he believes must transform the destiny of Africa.

Rocky Dawuni, who recently staged a show-stopping performance in Rome, says Africans must believe that they are in control of their own destiny and that whatever anybody would do for them will be a mere adjunct of their own effort.

The reggae sensation is lacing his boots for his annual characteristically electrifying Independence Splash which comes off on March 6 every year as well as launch his latest album Hymns for the Rebel Soul.

The 11-track album was launched onto the US market by Whole Foods Market - the country's widest food distributor.

Hymns for the Rebel Soul has just become available worldwide on iTunes since its exclusive release through Whole Foods Market. But creating music with a global flavour has always been a deliberate effort by Dawuni whose last album was recorded in more than five countries in Europe, America and Africa.

It is no wonder that his album Down the Revolution has been featured prominently on the FIFA 2010 video game - a feat millions of records have yet to achieve.

Rocky Dawuni was the toast of Rome on January 17 with a sizzling performance to crown the final night of the JOSP Festival organized by Opera Romana Pellegrinaggi, a Vicariate of the Holy See.

Dawuni took the stage at New Rome Fairgrounds at 7pm to a packed house consisting of Vatican officials, nuns, priests and people from all walks of life who had been waiting in anticipation of his performance.

Dawuni and his 11 piece band, which had all flown in from Los Angeles, immediately charged onto the stage with blistering intensity, and by the middle of their set the whole place erupted into a mass of young and old dancing and singing along to the music.

The concert was elevated to another level when Ghanaian-born Vatican official, Father Caesar Atuire jumped on stage with Dawuni for a performance of Rocky's classic song In Ghana to rapturous response.

This was followed by Italian multi-platinum selling songstress Alexia who also joined Dawuni for a celebratory rendition of Bob Marley's 'Three Little Birds'.

Officer arrested for forcefully kissing the thighs of woman ...
51 minutes ago